While it's certainly not news that the third installment of the Iron Man franchise will be a grueling ordeal for Tony Stark/Iron Man both physically and mentally, based on interviews given by Robert Downey Jr. and Kevin Feige, a reliable source on the current shooting location of Iron Man 3 tells us that the third film will seek to return to the isolated hero, as it did in the first installment of the film.  Those who have seen the first Iron Man will remember Tony Stark's lonesome journey in the early parts of the film, as he struggles to escape from his captors in the Middle East.  Our source tells us that current shooting sees a return to that lonely hero, as the current filming location, the small, rural town of Rose Hill, North Carolina, has been featuring Tony Stark alone and is set up for a multi-week shoot. Robert Downey Jr. is the only star on site at this time, and a bar and a diner have been constructed in old storefronts in the town, and a great deal of filming is to take place in the bar, according to our source.  Does this indicate that the well-known "alcoholism story" featured in Iron Man 120-128 will happen after all, but in a different context of the character's history, as earlier news reports indicate that the current film will focus on a very modern Iron Man storyline.  The setting will also be at Christmas time, in keeping with the filming that was done last month in Cary, North Carolina.  Is Stark alone during the holidays, drinking away the pain of what may be coming for him? It's not guaranteed though just what Stark will encounter yet, but our source tells us that the production company has applied for permits for gunfire, explosions and pyrotechnics.  Shooting begins on July 16th and will run through early August.  Check out this photo from the set where the bar will be.  Be sure to check back with us for more updates from the set! 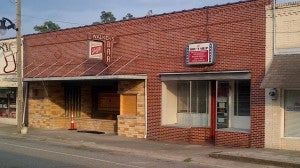