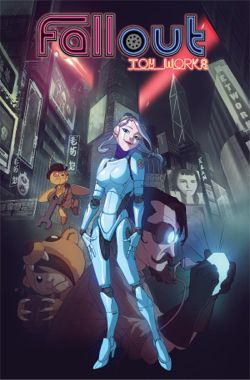 It use to be that people got into comic book writing in hopes of using it as a springboard into another career, such as screenwriting. Nowadays, it seems like people, who have already had success in other mediums, want to get into comic book writing. Fall Out Boy vocalist and bassist Pete Wentz is the latest successful musician to create his own comic book. Pete Wentz has teamed up with designer Darren Romanelli, Nathan Cabrera, Wintermen’s Brett Lewis and Imaginary Friends Studio's Sam Basri in order to create a new comic book series for Image Comics called Fall Out Toy Works. The series is set to debut this September. "Me and Darren came up with the idea of creating a world around 'Tiffany Blews'," Pete Wentz told MTV News. "It's more than a comic too. In the end, it will be a graphic novel, clothing, web site and possible toys themselves." Darren Romanelli added, "Pete had hit me up about designing him some custom gear and we immediately clicked. We've been throwing ideas back and forth for some time and Fall Out Toy Works stemmed from a place of passion and common ground between us. Of course, Fall Out Boy has been a major inspiration, but we're reaching in the larger world of art, fashion and pop culture. We've also brought in my frequent collaborator, Nathan Cabrera, to help conceive the wider world and are thrilled to have a writer of Brett Lewis' status realizing these ideas to their fullest potential with Sam Basri of Imaginary Friends Studios." Fall Out Toy Works is inspired by the ideas and lyrics of Fall Out Boy. The comic series will tell the story of a brilliant young robot maker who risks his entire company for his factory's newly produced android named Tiffany as she becomes his greatest passion and potentially his own destruction. Fall Out Toy Works #1 is scheduled to hit comic book stores on September 2nd, 2009.

Rat Queens: To The Slaughter Review: A Battle Fit for a Queen