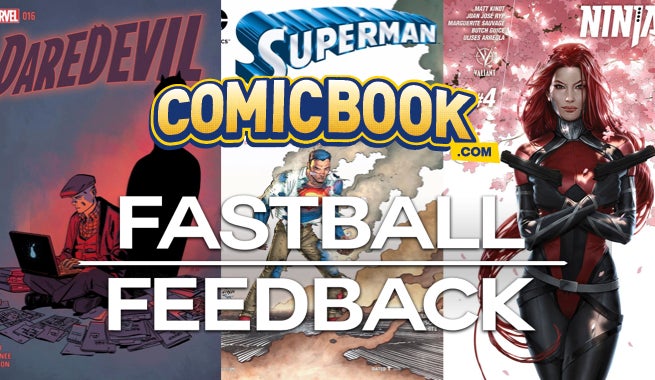 For more than 75 years, alter egos and secret identities have been a central trope in superhero comics. They are a major source of tension and a never-ending struggle to maintain. So what happens when heroes are exposed? This week, three comics examine that question in very different ways. Daredevil continues to balance work, life, and derring-do, the backstory behind Superman's public outing is exposed, and Ninjak tries to keep his head after an unfortunate exposure. All three comics are filled with potential for drama and some knockout stories. Let's see how they turned out. 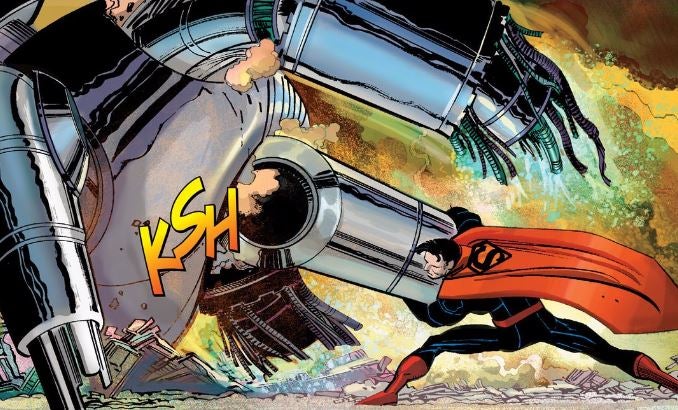 Superman #41 is the start of "Truth" and promises to reveal why Lois Lane outed Superman's secret identity. However, no answers are provided in this issue. Instead it focuses on Superman, Jimmy Olsen, and Lois Lane working together to combat a gun smuggling operation in Metropolis. It is a small-scale issue that shows Gene Luen Yang establishing his take on the Man of Steel.

Yang expresses a clear love for Superman here, making effective use of both his roles as a superhero and reporter, as well as his supporting cast. He includes a gotcha moment that will have die-hard Superman fans twisting in their seats at a seemingly incredulous turn. All of the various elements you would expect from a Superman story are in play, even if the thrust of the story isn't particularly exciting. There is a lot of set up, including an opening page that points to a significant change which fails to be carried out in the pages of this issue. This style of flash forward has become a tired trope in superhero comics, one the issue would be better off without.

John Romita Jr. and Klaus Janson offer some of their best work on the series to date with an action sequence that is the heart of the issue. It's fast paced, fun, and inventive, featuring a battle with a spider-like 3-D printer. Romita still has some occasionally stiff looking panels, but the big dynamic punches (like the one above) really land. He and Janson capture the power of Superman here and it looks fantastic. Dean White experiments with luminescent colors for effect in a few panels, which might look good in another book, but clash with Romita's rougher, pencil heavy style.

Superman #41 reads like a test drive. Yang, Romita, and the rest of the team are breaking in their new approach to the character. While there are some issues within the art and the plotting is solid at best, nothing is broken. In fact, the entire creative team seems to have a solid grasp of what they do well and how they would like to apply those talents to Superman. It's an encouraging start for what could be the best take on this series since its relaunch. 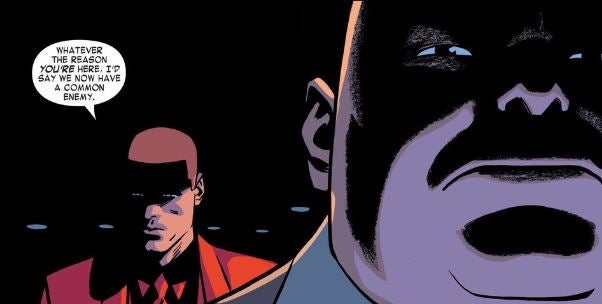 The end of Daredevil is almost here with the antepenultimate issue landing this week. Mark Waid and Chris Samnee have sprung the elements of their planned finale quickly, and the pace does not relent in this issue. In addition to following up on Daredevil #15's shocking reveal, they reintroduce even more characters from their run and deliver some surprising stakes in an issue too good to spoil.

There's a lot going on in Daredevil #15, far too much to unpack in a bite-size review, but the entire issue hinges around a single page turn. It comes early in the story during Daredevil and Kingpin's confrontation, and reveals Samnee to be an absolute master of the comics page. Everything in the scene is dark, obscuring almost all details beside the two central figures. It not only keeps the conversation focused and builds tension, but it also poses the scene from Daredevil's blind perspective. Then the Kingpin's point of view is revealed in a stunning splash page. It's the sort of page that requires you to linger for minutes without a single word on it, and is worth the price of admission by itself.

This one page may be the high point of the issue, but that shouldn't undersell the rest of the experience. Samnee delivers several more revelations that make the power of a single page turn incredibly clear. Daredevil #16 feels like a busy issue because it is. There are a lot of characters and events all occurring in tandem. The weight of everything happening makes it possible to forget other parts of the story until they reappear, but when they do return, it's never problematic.

Daredevil continues to surprise and astound with each issue. All of the madness introduced in #16 would overwhelm lesser talents, but Samnee and Waid juggle these plots almost with ease. Each significant moment lands, and the impact of some are enough to take your breath away. This is the setup for what looks to be a finale every bit as good as the series preceding it.

Ninjak #4 begins and ends on the same cliffhanger that concluded Ninjak #3. Ninjak is still exposed and still has the deadly, Medusa-like, assassin Roku lunging at him, but the tension is increased to even greater levels. The issue jumps away from this nail-biting moment in order to examine Roku's origins and the bitter irony they add to what is happening.

Matt Kindt provides plenty of style to this origin story. It is told like a folktale with an impartial narrator and clear structure. Roku's life before serving as an assassin extraordinaire is not completely detailed, instead the story focuses on how she was transformed into a woman who can control every cell in her body. It's a fantastical narrative with ninjas and oni, each of whom provides a unique challenge. Kindt gives just enough detail about Roku's motives and past to help readers make some leaps in logic. It's this subtlety that makes the final pages, and return to the present, significantly tenser.

The base of this story is continued by Juan Jose Rup with assists from Clay and Seth Mann. Their slick style provides a baseline promising everything that happened to Roku, Japanese demons and all, really did happen. The inclusion of Marguerite Sauvage provides Ninjak #4 with a special spark though. Her soft, moralistic panels provide an old-world sensibility that highlights the folk lore aspects of Roku's story. These inclusions feel as though they could have been lifted from a scroll, and provide a comparison to the modern narrative that is different, but never distracting.

Ninjak #4 jumps away from a heart-stopping cliffhanger, but still manages to make this break feel both important and worthwhile. Rather than distracting from what is happening, it make the present story all the more significant. It's the sort of unique, one off, scripting at which Kindt excels, and the artistic team makes the issue feel even more special. The result is another great issue of Ninjak, fusing its own importance into a much larger narrative.