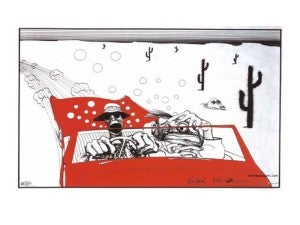 IDW Publishing is taking a trip through bat country, adapting Hunter S. Thompson's acclaimed best-seller Fear and Loathing in Las Vegas into an original graphic novel. The release date and creative team have yet to be determined. Given the distinctive look of Ralph Steadman's illustrations for the novel and related merchandise in the years since, it's difficult to imagine that somebody like Sam Kieth, who just announced a new relationship with IDW, isn't being considered. "I've read Thompson throughout my entire life, I'm very serious about doing this novel right," said IDW CEO/President Ted Adams. This exciting new project further explores the literary relationship between novels and comics that IDW actively pursues. Fear and Loathing in Las Vegas follows Thompson on his surreal journey through Sin City. His trip was molded by the stimulants and psychedelics. Influenced by the death of American counter-culture, the story challenges the idea and application of the "American Dream." In 1998, Fear and Loathing was translated to film by the award-winning director Terry Gilliam and featured Johnny Depp in the lead role. A previous film, Where the Buffalo Roam, had seen elements of Fear and Loathing in Las Vegas as well as Fear and Loathing on the Campaign Trail '72 integrated together for a Bill Murray vehicle. Depp went on to play Thompson again in The Rum Diary. Thompson's work has been instrumental in the development of modern American journalism appearing in Rolling Stone Magazine, The New York Times Magazine and Esquire. His trademark "Gonzo" style of writing is praised for its fluid tales laced with danger and corruption, often examining the hazards of contemporary American existence.

Fear & Loathing in Las Vegas Being Adapted Into Graphic Novel