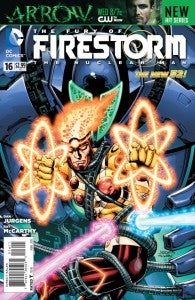 With the release of The Fury of Firestorm the Nuclear Man #16, out today from DC Comics, Dan Jurgens and inkers Karl Kesel and Ray McCarthy took the Nuclear Man (men?) someplace he/they haven't been before: away from his roots. Firestorm, in this issue, starts to really build some momentum in the journey away from the multiple Firestorms/government conspiracy/Dr. Megala stories that Jurgens and McCarthy were left with at the start of their run on the book.  Jurgens joined us to talk about moving on and his hopes for the future. As always, this is a SPOILER-FILLED conversation. Why not buy a copy and read along with us? You can preview the issue at the CBS Man Cave. 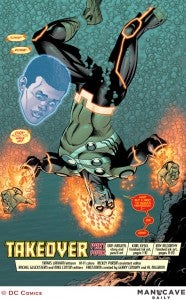 Wow, Karl Kesel on inks. Has he ever finished your work before? Obviously you worked together--but on separate books--for years on Superman. Dan Jurgens: True, Karl and I worked together on the Superman books, as did Ray McCarthy. However, Karl inked me several times a number of years ago. He inked an issue of Amethyst I drew, as well as several issues of Tales of the Legion of Super-Heroes. Karl is tremendously talented as both an inker and writer and we can't thank him enough for stepping in to help out. ComicBook.com: Was it you guys or Hi-Fi that decided to go with the darker color palette during the underwater sequence? It makes sense, but it also evokes Black Lantern Firestorm (Deathstorm? Was that it?). Dan Jurgens: That was all Hi-Fi, and it was a brilliant thought. As soon as I saw it, I told Brian Miller that I thought it was absolutely fabulous.  They did a fantastic job on the entire issue. ComicBook.com: I think they miss the real question in considering whether they need to breathe--even if the body does need to breathe, couldn't Firestorm turn whatever's handy into oxygen? Dan Jurgens: A well-schooled, knowledgeable Firestorm would have several solutions he might come up with. But these guys are young, and even though Jason is really smart, the obvious solutions don't always occur to them. Some of it is the pressure, some of it the lack of experience. One of these days I want to do an entire issue where they experiment with their powers in order to find out what the limits really are. I actually have some great ideas in mind for it. 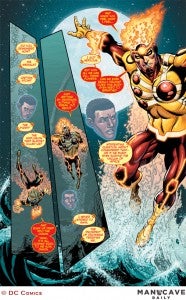 ComicBook.com: Should Megala regain his consciousness, do you think he would be more likely to have a mean-on for Firestorm again, having tasted that power, or to go the Arnim ZOla route and try to put himself in DataXen or something? Dan Jurgens: Megala will regain consciousness, but not his memories. The Firestorm chapter is over for him. ComicBook.com: Speaking of DataXen, I never thought of it until I was re-reading your Superman run: Did you get to use any cool "intangible villain" ideas for DataXen that didn't make it into the Anguish story? Dan Jurgens: I saw them as very separate stories and themes, so no. ComicBook.com: Glad to see our villains popping back up again; we always talk about "rogues galleries" in comics, but honestly not that many heroes have them. Do you think giving Firestorm recurring villains who are more or less "his" helps to elevate him a little? Dan Jurgens: Recurring villains are an important part of any title, as far as I'm concerned. In fact, I think Firestorm has always had a history of identifiable villains and that was a key part of the book's success. That's something I'd like to pick up on. ComicBook.com: That nine-panel page set during the football game was extremely effective in the digital edition; when you're doing a guided view, you don't see the last panel, and so it really subverted the expectation for what the rest of the issue would be. Dan Jurgens: As I've said before, that concept of how readers might read something digitally versus how they read it in print is something we're all trying to get a handle on.  My own experience with reading digitally was that I really didn't care for the guided view. However, since then, it's really grown on me. It does require a bit of an adjustment in how you approach things. 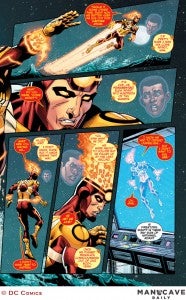 ComicBook.com: With the computers shot, Megala an amnesiac and Continuum in shambles, it certainly seems as though this is pretty definitively closing the chapter on the first year and a half of the series. Is this a bit of a new beginning, where you can really roll up your sleeves a bit on your run without the leftovers from Gail, Evan and Joe's runs waiting to be addressed? Dan Jurgens: I think it's best for us to move on to the next chapter. We have several things in development that we want to explore so it's fair to say the train has left the station. ComicBook.com: Geez, it sure seems like a lot happened this issue. Was that pacing just to keep the book moving or was it related to collecting the book? Dan Jurgens: From the day I first started thinking about doing the book, I felt that it had to be a fast moving series. Once again, that's part of Firestorm's history. Far, far too many books have become so padded that they're tough to read. In fact, I recently set down with a few arcs from various titles and diagramed them, just to see what was there. It was shocking to see that the answer was, "not much". Somewhere along the way, it almost seems like action has become a bad word. ComicBook.com: Teen Titans Go. How many costumes has Kid Flash had in the New 52?! Dan Jurgens: Good point! He rivals the Wasp for costume changes! Seriously though, I'm very happy with the way Firestorm #17 turned out. It's a fun story with the Titans and also features a level of progression for Firestorm as character that we don't normally see in comics.