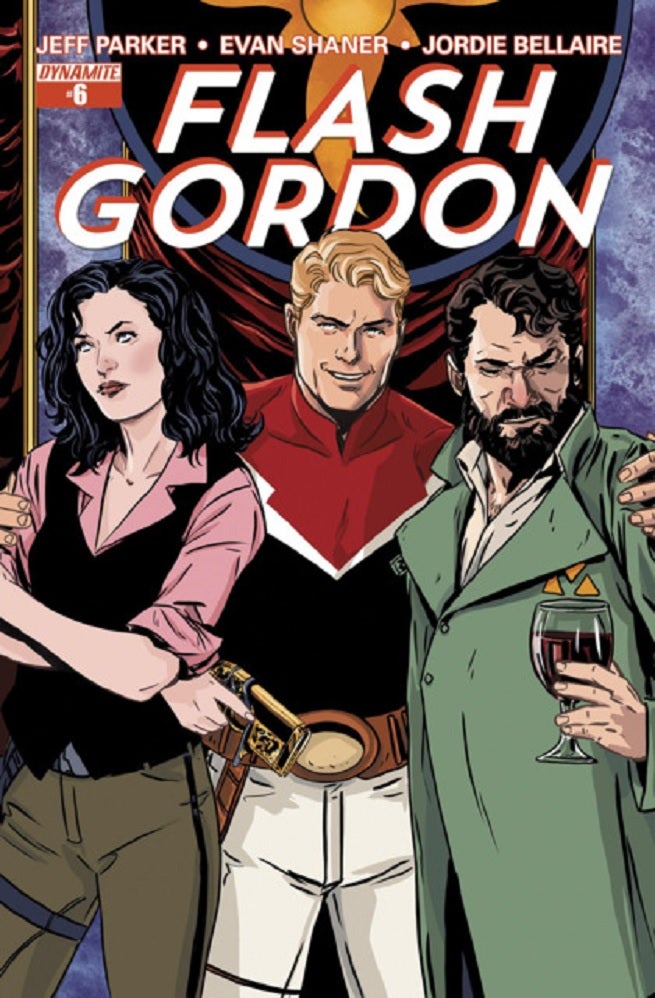 It is always a pleasure to read a comic where you can tell the creative team is just having a blast. Whether it's Jeff Parker's sparkling writing, Evan "Doc" Shaner's glorious artwork, Jordie Bellaire's gorgeous colors, or any of the other people whose hands have touched this title, one gets the feeling that everyone involved is firing on all cylinders and thoroughly enjoying the experience. I'm honestly not sure when the last time was that I had this much pure, unmitigated fun reading a comic.

Every page is a visual treat and the characters are allowed to be larger than life in the most engaging ways. Flash Gordon is our headstrong adventurer, Dale Arden is the wily firecracker of the group, Hans Zarkov is a lovable rogue, Ming's villainy is positively infectious in its grandeur, and Vultan… Vultan is something else.

Really, I could load this issue down with praise and superlatives giving away all the little gems that populate its pages but that would do the book a disservice. You owe it to yourself to be reading this comic. I mean that in all seriousness. It's a blast and in order to preserve its impact, I'll be trying to avoid spoilers as much as possible in the breakdown. That being said, I may have to touch on one or two but I'll give you fair warning…

After praising the artwork in verse in my last review, I'm not sure how else to express how perfect the visuals are in this book in a new and interesting way. This issue continues Flash, Dale, and Zarkov's adventures in Sky World, and Shaner and Bellaire take every advantage of the setting. The design of the Hawkmen's armor is spectacular in a way that suggests an art nouveau or similar influence, all of the characters are (wildly at times) expressive, page layouts are varied and thoroughly engaging, creature designs are imaginative, and the color work is some of the best I've ever seen.

Shaner's work is wonderfully executed and has a timeless quality that should be the envy of his contemporaries. His work is not just about the big picture, he also gives attention to the details such as the unique pupils of the winged denizens of Sky World. Bellaire is in my admittedly limited experience probably the best colorist in the business today, and quite possibly the greatest whose work I've ever had the fortune to sample. Nothing looks flat in this book. All of the colors are richly textured and shaded, giving the visuals even greater depth and impact. This is honestly the first time that I've looked forward to wide vistas of sky and I do so because of the lovely shading work that Belliare does with the cloudscapes. Combined with Shaner's inks, a scene with diving Hawkmen becomes reminiscent of ecclesiastical art with its angelic figures backed be the sun poking from behind a cloud bank, its rays piercing their formation. Reworked and in a slightly different context, this could almost be the fodder of stained glass windows.

Jeff Parker's writing is fully up to the task of bringing this world to life. He manages to do an impressive amount of world-building in this issue without it ever feeling clunky or forced, and it is very much appreciated in lending an air of artistic verisimilitude to this fantastical setting. I already praised him for the strong characterizations but it is worth noting again, and the dialogue sparkles. It's also particularly gratifying to see his depiction of Vultan which has nods to that ONE PARTICULAR portrayal of the character without being slavish or too on-the-nose about it. He and the art team did indulge themselves a single full-page nod to a particular line from the 1980 Flash Gordon movie but I have to say that rather than feeling out of place or goofy, it just had me grinning ear to ear like an idiot.

Like I said earlier, I'm trying to avoid spoilers so I'll just reiterate how much fun this book is. It's smartly written, visually stunning, uncomplicated yet intelligent fun. And in this day and age couldn't we all use a little more fun?

Oh, and I would be remiss if I did not mention "Second Story" in this issue. It's a two-page section at the end written and colored by Jordie Bellaire with art from Greg Smallwood. It's nicely written and the artwork is quite good. It's only two pages of mostly close-up shots so there isn't a lot to say about it but it's intriguing, enjoyable, and doesn't feel out of place. I do have one question but that will come later…

I could nitpick one or two things here. The Hawkmen make reference to a game of sorts called "Drop and Catch" and I wonder why the name of the game wasn't set off by quotation marks given that the all-caps lettering makes it hard to distinguish multi-word titles. Really, that was barely worth mentioning and it was the thing that stood out the most to me as something objectively negative.

So, this is the one place where I feel like I need to delve into SPOILER territory and it deals with the "Second Story" by Bellaire and Smallwood. It depicts Ming cursing his subordinates and then bemoaning his own emotions with an implication has he has feelings for Dale Arden. I don't have much experience with the Ming character outside of this interpretation of the Merciless Mongoan (Mongoid?) Madman, but I never expected to see him mooning over a holographic representation of one of his greatest enemies. I need to see this play out and develop before I come to any conclusions about this plot/character element, but at face value it seems a little odd for someone whose title is "Merciless."

...my complaint that the T&A-laden advertising in the back of this book is apparently resulting in a T+ rating for what ought to be an "All-Ages" appropriate book.

This wouldn't bother me except that I worry Dynamite is needlessly and unfortunately limiting its potential audience. I could also note that the Roberto Castro "80th Anniversary" cover of this book has a woman, presumably Dale, lying in the foreground with her spine twisted in a nigh-impossible manner such that her chest and posterior are both visible to the viewer.

What else is there to say? This is an amazing comic that you oughtta be reading. Get on that!