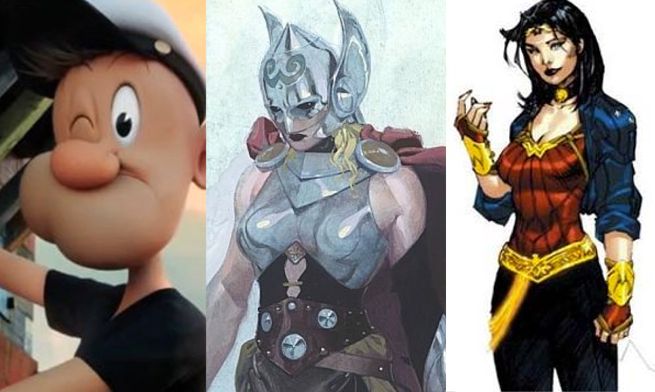 Fox News is outraged. Outraged I tell you. What has got Fox & Friends all in a tizzy? Well, it involves some recent changes made to cartoon and comic book characters.

This past week, Sony Animation officially released some test footage for an upcoming Popeye movie. It’s not completed footage, but one thing that Fox News immediately noticed was that Popeye was missing his pipe and tattoos.

In what they describe as a very sad story, Fox & Friends co-host Clayton Morris wonders aloud if the removal of the pipe and tattoos means they are wussifying Popeye. Co-host Tucker Carlson adds, “Nothing is scarier to a modern liberal than tobacco. If Popeye were driving around giving the morning after pill to fourth graders that would be totally fine. But smoking a pipe, a symbol of freedom and masculinity in America itself, the reason this country exists, tobacco, that’s like, ‘Oh, that’s outrageous. That’s a major sin.’”

When co-host Anna Kooiman attempts to point that smoking might cause cancer, Carlson says, “No child has ever smoked a pipe because of Popeye.”

After voicing their displeasure about the new Popeye, Fox & Friends moved on to the new Thor and Wonder Woman. After Carlson points out that Thor is now a “chick,” Morris says, “We have to cram a female into every male version of a character. We had this in seventies of course, Spider-Woman we had.”

In regards to Wonder Woman, Carlson doesn’t like the dark tone colors of Gal Gadot’s Wonder Woman costume. Carlson also shows a picture of Wonder Woman in a pants suit from the comic books (which is actually an old design that was only temporarily used). Carlson says, “Is it wrong for me to say, 'I want to see Wonder Woman in the original short-shorts and the halter top.'”