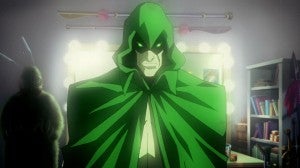 Having just concluded a two-season adaptation of DC/Vertigo's Human Target, the Fox Network has bought the TV rights to DC's The Spectre, according to Nikki Finke over at Deadline.com.

According to Finke, Brandon Camp of John Doe fame will write the script and co-produce it along with Bill Gerber, the producer of the Clint Eastwood hit Gran Torino.

It will be interesting to see whether Gotham is retained as the setting, assuming the show makes it to the pilot stage. After all, setting something in Gotham and not having (and probably not referencing) Batman will seem a bit strange to most casual viewers.

Which version of the character will be featured is also unclear based on the article (except that it presumably will not be Hal Jordan under the green hood); Finke describes The Spectre as "a former cop serving time in afterlife limbo who hunts down earthly criminals on behalf of the dead — and mortals soon to be dead, if ultimate justice is not served." Obviously that could be either Jim Corrigan (the original and most recognizable version of the character, who therefore probably appeals to Warner) or Crispus Allen (the current version, who's African-American, both of which probably appeal more to DC Entertainment). Without noting it (or probably knowing the difference, frankly), Finke uses images supportive of both versions of the character (Corrigan by Alex Ross and a gotham Central cover, which would feature Allen) in her story; taken at face value, the fact that she identifies the character as originating from Jerry Siegel and Bernard Bally might suggest Corrigan, and an image search for Corrigan could have come up with Gotham Central, where one of his relatives was the one responsible for Allen's death.

Of course, who knows? According to the Deadline article, Camp was introduced to the character through Geoff Johns. So maybe Hal's not off the table after all!

Fox Set to Channel The Spectre