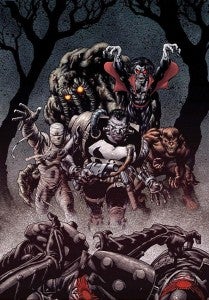 What I'm telling you is a clear case of "it's not you, it's me". After falling in love with comics in middle school during a fateful trip to a used bookstore, which just happened to come on the heels of seeing 1989's Batman on the big screen, I dove into comics and auditioned, harvested and read just about every character conceivable, finding something interesting and cool, even if it was transitory, about each one, until I had finally, in my 7th grade mind, arrived at my favorites. Many favorites have come and gone since, except for one man, one character I can't get my head and heart around. The Punisher. For the life of me I couldn't get into this guy. I totally understand the rage he has going and the sense of vengeance he harbors against criminals for the loss of his family, but the guy just never did anything for me. He's been on this Earth longer than I have, and he's been in just about every Marvel Comics book at some point or other and starred alongside his share of heroes, but for me, he just never clicked. I've tried, believe me! I've read mini-series, and MAX series, and The Punisher Kills the Marvel Universe, and still nothing made me warm up to him. For over twenty years now, ever since discovering his comics, I've given chance after chance, but the skull shirt, the attitude, the villains he fought all just couldn't rouse me, but then I picked up Dark Reign: The List: The Punisher.Here was something I was interested in seeing. Just what could Norman Osborn do to a guy like the Punisher who seemed unkillable? "Ok," I thought, "Maybe Normie will recruit him or something, or lock him up." Nothing that simple! DAKEN FREAKIN' HACKED HIM TO PIECES! I couldn't believe it. I was stunned. I was shocked at the brutality of the issue and the sheer willingness of the writers to go. there. Even after making the man bury his own family in Punisher #10 after The Hood resurrected them, that was HEAVY. This seemed like the final defeat and end to Frank Castle's mission. I could get behind that, as it seemed final and appropriate, a rest for the weary warrior. And then along came Dr. Michael Morbius, the living vampire. When I saw the cover to Punisher #11 with "Frankencastle" on the cover, I recoiled, shaking my head. This cannot be. What sort of silly stunt was being pulled here? I know this is comics and all but COME ON?? He was a casserole at the end of The List. I was determined to walk away from the book, having already tried this before and not liking it. Something in my gut told me to at least humor them. I'd try it, hate it, write a scathing review on this site and move on. And yet, I picked up issue twelve, then thirteen, and most recently, number fourteen. I think I wanted to give the character another fair shake, and I'm glad I did. After being cobbled together by Morbius, what has emerged, for Frank Castle and the reader, is a new world, a new purpose and a new direction. Having been reanimated as a "monster" of sorts, Castle is now living with a rag-tag group of Marvel characters such as Man-Thing in a sort of Island of Misfit Toys from Hell. The group pretty much all live together in a complicated underground network and are in fear of being killed by a strange and determined monster hunter, whose origin I won't spoil, so pick up The Punisher #14 for more. What works about the series is its willingness to be campy, silly and yet still try to retain plenty of gore and violence, which are stock in trade of any Punisher book. I have to hand it to Rick Remender and company; they've managed to, pardon the expression, new life into a character that had seen so many relaunches and aborted attempts at long-standing solo endeavors in the Marvel U. I'm sure there are others like me who picked up the book out of sheer interest and incredulity, but hopefully they have found a fresh new story that isn't afraid to make you laugh and cringe all in the span of a few panels. He has found a new life amongst these monsters, one where moral complexity with the likes of Osborn, Captain America and Iron Man may no longer be needed, but with new challenges and dilemmas all its own. I will probably pick up issue 15 when it comes out, as now I'm past that point of curiosity and, finally, welcoming Frank Castle, tubes, screws, rotten skin and all, into my stack of long-time friends like Batman and the Avengers. I don't think I missed out by not sticking with another Punisher title, but fans of the old Punisher may be missing out with this new world and new direction.