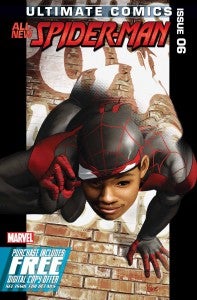 Marvel Comics had told fans not long ago that they were aiming to include free digital download codes in special, polybagged editions of all of their $3.99, standard-sized comic books soon. It appears that program will go into effect beginning in January and beginning in the Ultimate universe.

The publisher has just distributed a press release indicating that, beginning with Ultimate Comics Spider-Man #6 in January, all of their Ultimate Comics Universe titles will be polybagged and include a free download code for a digital copy of the issue, redeemable through Marvel's iOS and Android apps.

“Looking at the tremendous response to our digital copy code offer with Avenging Spider-Man #1, it’s clear that this is something fans want to see more of and we’re delivering it on a scale never seen before, with no extra cost to retailers or fans—and historic benefits for our retail partners," explained David Gabriel, Senior Vice-President of Sales, Marvel Entertainment, in the release.

Long before the rest of Marvel's line was available digitally on the same day as print release, the Ultimate Comics line became the first full line from any mainstream American comics publisher to be made available that way beginning with Ultimate Comics Thor #1 in 2010, according to Marvel. The line rolled out in 2000 and allowed contemporary creators to work with younger and more malleable versions of established heroes without the constraints of decades of continuity. The line has since developed its own cumbersome continuity, which they've tried to shrug off in the last couple of years with relaunches. Ultimate Comics Spider-Man made headlines around the country and drew the ire of conservative talk host Glenn Beck last year when Peter Parker died and was replaced as Spider-Man by Miles Morales, a new character of African and Hispanic descent.

While DC Comics beat Marvel to the punch with line-wide, same-day digital release earlier this year, it seems that Marvel is looking to change the way digital comics are perceived. DC told retailers and reporters that revenue raised from digital was like the width of dental floss, compared to a sheet of paper representing revenue from print sales. Then they priced digital at the same level as physical copies--a controversial decision--and recently told Newsarama that digital sales were closer to 10% of traditional unit sales. Marvel, who until September had always been much more technologically advanced than most of their competitors, have started including digital copies as a value-added feature at no additional cost, not unlike what's commonly done in home video sales.

And, like home video sales, you can still go online and buy a digital copy for the same amount you would pay in the store for a comic book you can fold up and walk around with, so Marvel can make money either way; they just seem to consider digital differently from the rest of the market.