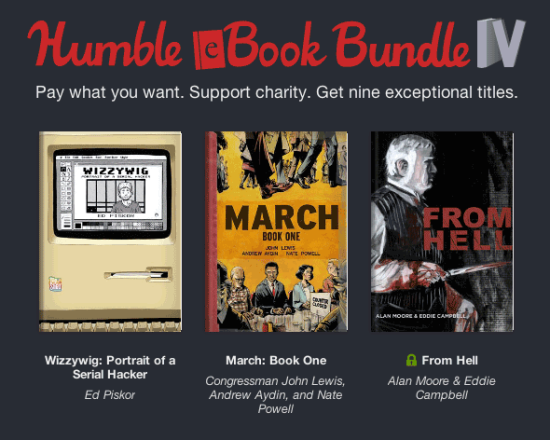 The bundle is a mix of comics, novels, and short story anthologies. Pay anything and you’ll receive Ed Piskor’s debut graphic novel Wizzywig: Portrait of a Serial Hacker and the award-winning graphic novel March: Book One, by Congressman John Lewis, Andrew Ayin and Nate Powell. The bundle also includes The Sword and Sorcery Anthology, featuring short stories by some of fantasy’s greatest authors, including a Conan story by Robert E. Howard and a story set in the world of A Song of Ice and Fire by George R.R. Martin.

Paying more the average price gets you From Hell, the masterpiece graphic novel by legendary creators Alan Moore and Eddie Campbell, as well as Wizard’s First Rule, The Alchemist and The Executioness. Paying at least $10 unlocks Yahtzee Croshaw’s Jam and Lovecraft’s Monsters: An Anthology, featuring a story by Neil Gaiman.

The deal will only be available for two weeks and more books will be added. A customizable portion of your payment will be donated to Doctors Without Borders and the Comic Book Legal Defense Fund. You can check out the trailer below for more details and make a purchase at the Humble Bundle website.

Guardians of the Galaxy's Dave Bautista Says Marvel Studios Didn't Ask Him to Voice Drax in What If...?