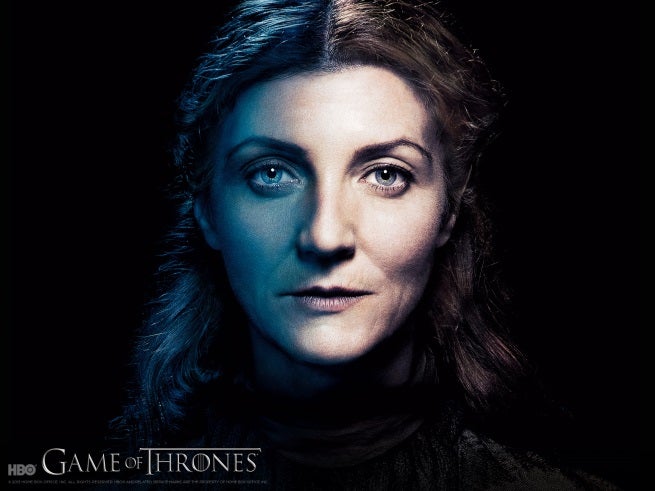 During tonight’s season finale of Game of Thrones, many fans were eagerly anticipating the reveal of a new character. This post contains absolutely huge SPOILERS for Game of Thrones, so if you don’t want to know them then stop here.

In the books, Lady Stoneheart first appears in the epilogue of A Storm of Swords. She first leads the Brotherhood without Banners as they hunt down and then kill two young member of House Frey.

It is eventually revealed that this Lady Stoneheart is actually a resurrected Catelyn Stark. She still bears the scar on her throat where it was cut at the Red Wedding, and her body looks like corpse. All kindness and goodness has been drained for her, leaving only vengeance as she hunts down anyone connected to the Freys, Boltons and Lannisters.

There’s still the question of how Catelyn is alive at all. It turns out that Berric Dondarrion and the Brotherhood came upon her body floating in a river three days after the Red Wedding. Using Thoros of Myr’s power of resurrection, Dondarrion sacrificed his life in order to bring Catelyn back.

Stoneheart now leads the Brotherhood, but their mission has become one of bloodthirsty revenge, splitting the group over her motives. Stoneheart and the Brotherhood have mostly been background players in the books so far.

So did Lady Stoneheart make her appearance in the Game of Thrones Season 4 finale, as Lena Headey had hinted? Well, it turns out that the biggest shocker of the Game of Thrones Season 4 finale was that this character that everyone had expected to see was not shown. Immediately after the episode, fans turned to social media to express their disappointment and outrage over Lady Stoneheart not appearing.

It would have made for the perfect ending and tease for Season 5 if Lady Stoneheart had popped up at the end. Some fans expressed on social media that they even watched through the credits, expecting that Game of Thrones might give fans a post-credits surprise. But sadly, there was no Lady Stoneheart even after the credits.