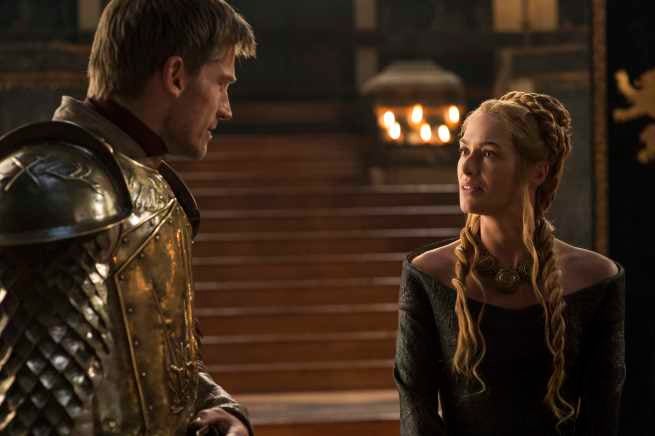 Game of Thrones’ Season 5 premiere episode, “The Wars to Come,” gave us something that the series has never given us before: a flashback scene. But what is the significance of this flashback? Who was that witch, and what does her prophecy mean.

We’ll do our best to explain below, by drawing on what we know from the show and the books it’s based on, but naturally some SPOILERS may come from it. You’ve been warned.

Who was that witch?

There’s not a whole lot of backstory for the witch to go on in the first place, but Game of Thrones didn’t both with what there was. That’s fine, as the character only really has purpose in this scene, but if you’re wondering she does have a name: Maggy. Well, that’s what she was called in Lannisport anyway, Maggy the Frog, but it’s not her true name and some suspect that it’s a bastardization of Maegi, the word for practitioners of blood magic from Essos (like Mirri Maz Duur). The story goes that she was brought to Westeros by her husband, a spice trader, and their son founded House Spicer, a house that benefited greatly from their role in the Red Wedding.

What does her prophecy mean?

Cersei got to answer three questions. Let’s break them down.

When will I marry the prince?

Cersei is talking about Prince Rhaegar, whom Tywin Lannister intended to offer her to for marriage. Maggy tells Cersei that she will never marry the prince, but will marry the king. This foreshadows King Aerys refusing Tywin’s offer, Robert’s Rebellion, and Cersei eventually marrying Robert Baratheon after he is crowned king.

Will I Be Queen?

Maggy tells Cersei that she will be queen, and that does come to pass. She also tells her that her reign will be short, and another, more beautiful queen will replace her. This would seem to come to pass when Margaery Tyrell entered the picture, first marrying Joffrey and now betrothed to Tommen, thus replacing Cersei as queen.

How many children will I have with the king?

Maggy tells Cersei that the king will have 20 children, but Cersei will only have 3. Cersei doesn’t understand at the time, but Maggy is foreshadowing Robert’s many bastards, had outside of wedlock, and Cersei’s three children, born of her incestuous relationship with Jaime.

Maggy also says “Gold shall be their crowns and gold their shrouds.” The shrouds foreshadow the deaths of Cersei’s children, which she will apparently live to see. That’s already come to pass with Joffrey, who was crowned king and then died. Tommen now has the crown. Is he next to die? Will that leave Myrcella to take his place a queen, earning a crown of her own, before she too dies? His part remains to be seen.

Differences from the book.

In the books, Maggy foreshadows Robert having 16 children. In the show, its 20. I’m not sure if that’s a significant difference, or if the writers just thought the line sounded better that way.

More importantly, the show left out an entire portion of the prophecy. The prophecy is sometimes referred to by fans as the “Prophecy of the Valonqar.” That title makes no sense in the show, because the bit about the valonqar was omitted. Valonqar is the High Valyrian word for “little brother.” In the books, after the bit about all of Cersei’s children dying, Maggy goes on to say, “And when your tears have drowned you, the valonqar shall wrap his hands about your pale white throat and choke the life from you.”

This probably goes a long way to explaining Cersei’s constant distrust of younger brother Tyrion, though it’s worth noting that Jaime followed Cersei during their mother’s labor with them, making him technically a valonqar. There are interesting reasons why the show may have dropped the line – using High Valyrian could be confusing and hard to explain, they don’t want to be trapped into that particular bit of prophecy, or maybe they don’t want to give Cersei that justification for her attitude towards Tyrion.

Game Of Thrones: Who Is The Witch And What Does Her Prophecy Mean?