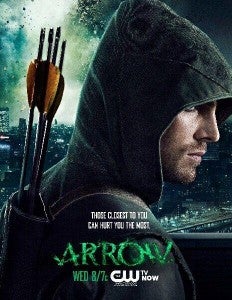 SPOILERS AHEAD for tonight's episode of Arrow.

With another Geoff Johns-written episode of Arrow in the book, the DC Entertainment Chief Creative Officer has been making the media rounds today to promote the episode. While much of the conversation has been pretty standard stuff, he did answer one question for Green Arrow TV that was so sensitive to the episode's content that GATV couldn't even run it until after the episode aired. That is, of course, the revelation that Tommy Merlyn has learned Oliver Queen's secret, and...well, he's not happy about it. "I think you've seen how certain people reacted. Diggle, Felicity… but those aren't life long friends. Those are people who are brought in relatively quickly in the relationship," Johns told the site. "I think you can see the pain on Tommy's face at the very end of the episode, when Oliver answers that question, 'Were you ever going to tell me?' And Oliver answers that so honestly. You see Stephen just deliver one hell of a performance there, and he just said 'No.' I think that just crushed Tommy. I think it shatters him in a way that he's never been hurt like that before." How that'll play out, with Tommy's father as one of the series big bads and a likely Spider-Man-like confrontation between the two looming for the finale, is anyone's guess.