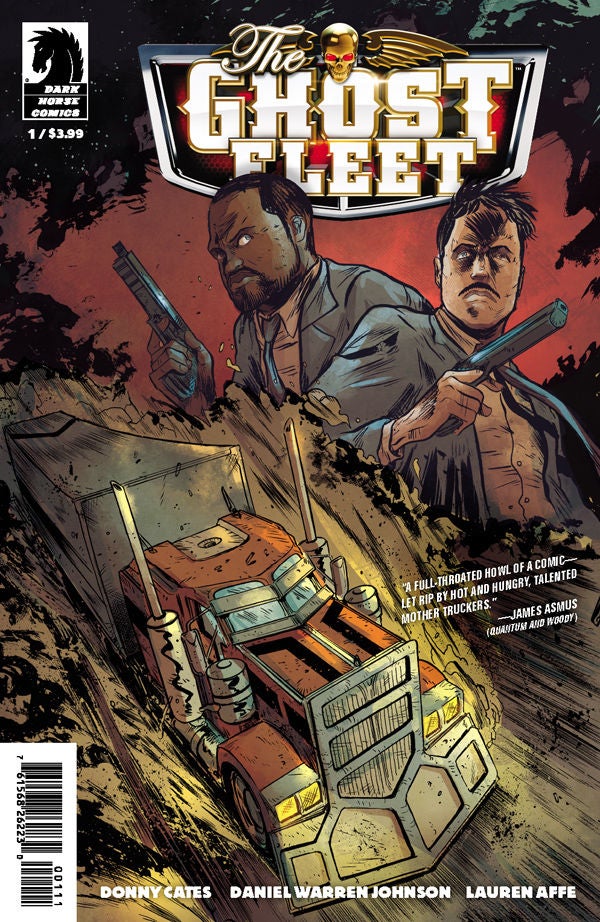 Ghost Fleet #1 is a comic that knows what it wants to be and what is expected from a first issue, then delivers on both accounts. It’s a series that plays with action and horror tropes, hammering both of those concepts hard in these pages. It may be light on exposition and lore, but accomplishes what it intends.

Daniel Warren Johnson composes the action in this issue, filling it with car chases and shoot outs. Car chases are notoriously difficult to create in the comics medium. The momentum that can be found in film rarely survives translation to static images. Yet Johnson, in a style similar to Matteo Scalera, finds a way to capture the high velocity and danger of vehicles careening towards one another at 60 or 80 or 100 miles per hour. His line work streaks across the panels and blurs the forms. He positions his panels to emphasize the position and movement of vehicles. The shapes of cars are stretched back into wide panels as they barrel toward the reader.

The gunplay and stunts work just as well. When characters are engaged in a shootout down the highway, he sets panels in close to create the sense of claustrophobia within the vehicle. When the focus shifts outward, it allows for actions to feel more dynamic and explosive. The action does veer towards confusion at a couple of points. In a moment where a character is killed by a supposedly obvious threat, the threat is not presented as being obvious. Although the majority of Johnson’s work flows naturally, there are a few moments that require a second or third reading in order to create a coherent flow.

The comic is much more interested in Johnson’s story than the plot that sets it into motion. Donny Cates assembles a structure that allows the highway pandemonium to occur with minimal interference. There are some necessary character beats to set up a few final twists. There’s not much reason to invest in either of the two leading men though. The biggest element of pathos feels grafted on and is only mentioned in conversation; the most interesting part of either man is their ability to aim while leaning out of a speeding semi.

The premise itself doesn’t provide much of a hook either. There are some odd connections made to colonial history in the opening page that are subsequently ignored for the rest of the issue. The titular ghost fleet lacks context. It is unclear as to whether it is a corporate organization, connected to government, or part of some secret cabal. There is no need to provide all of the answers in a first issue, but there’s very little attention paid to what the ghost fleet is, who controls it, or how these men became part of it. The ghost fleet acts as a mystery box, but the story quickly ignores that premise in favor of the action at its heart.

The final page of Ghost Fleet #1 is all promise. It promises that the action and horror present in this issue will only increase as the series continues. The premise and character work may not become any more complex, but there’s nothing wrong with that. Ghost Fleet is a comic that understands what it does well and is leaning into that strength. The more shootouts and car chases there are in the future of this series, the better it will be.