Dragon Ball Z fans who can't get enough of the new Golden Frieza are in luck, as the resurrected villain is set to become a playable character in Dragon Ball Xenoverse.

Xenoverse, a fighting game based off of the popular anime franchise, will offer Golden Frieza in its third round of downloadable content. Other characters in the download pack will include Jacco from Jaco the Galactic Patrolman.

As Comicbook.com previously reported, Dragon Ball Z's chief villain is set for a return, with a fresh coat of gold, in the upcoming film Dragon Ball Z: Resurrection of F. In the film, Frieza's followers resurrect the villain with the power of the Dragon Balls, making all sorts of problems for the universe's heroes. 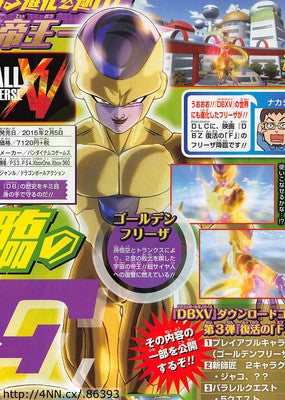 The downloadable content's release date is not yet known, but Dragon Ball Z: Resurrection of F premieres in Los Angeles on April 11.

And in case you missed it check out our list of favorite characters to Go Gold!