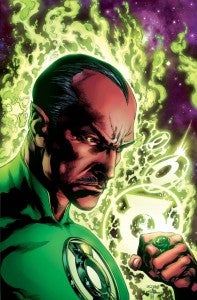 One of the interesting and fun things that the DC Universe has done so far with its relaunch has been its twists and turns to some of the way things were in the DCU just a few weeks ago. The first issue of the newly launched Green Lantern is certainly one of the best examples of this. Geoff Johns pens an interesting opening tale that presents a role reversal between long-time adversaries Sinestro, long-time wielder of the yellow power ring and former Green Lantern, and Hal Jordan, the most well-known Green Lantern. The issue gives the reader a good sense of time and place in regards to what these two iconic figures are doing now, and the story succeeds overall at giving us a believable set of characters and circumstances that give a rich playground to explore.

The story unfolds with a bit of a surprise, with Sinestro speaking the Green Lantern oath. The guardians appear to have reinstated Sinestro as a Green Lantern, and if the cover of this first issue didn't catch your attention, then perhaps the decision to keep Sinestro under watch by making him one of the trusted Green Lantern Corps again will! Contrasting this surprising turn, along with some shocking violence from the guardians towards one of their own, is down on his luck Hal Jordan. Facing some stiff life problems, Jordan attempts to put his life back together after being stripped of his green power ring. The typical Jordan cockiness is gone, or minimized perhaps, which makes sense in making it a more realistic first issue.

Carol Ferris appears, offering Hal a chance to get back on the path to not only monetary security, but perhaps some sense of purpose and dignity as well. The scenes cut back and forth between Hal's plight on Earth and Sinestro's protective monitoring of his home planet. The story wobbles a bit where Sinestro is concerned, even though we are given his as the protagonist, an anti-hero of sorts. It's never quite as balanced as it could be if we are to accept him as the focus of this tale, and the final page of this issue ends with an expected setup for the next issue. Overall though the issue succeeds in presenting new territory for these characters and what they mean in their respective universes. Grade: B+

Green Lantern #1 Review: A Mostly Glowing Start to a Series