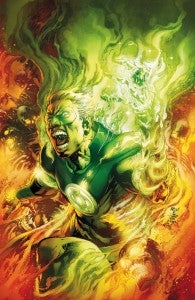 Ending weeks of fevered speculation, Earth 2 Green Lantern Alan Scott has been revealed as a homosexual, in an issue that will hit next Wednesday, according to published reports. A multi-pronged media blitz by the publisher has revealed the truth about the character, who will make his debut as Green Lantern in next week's Earth 2 #2 by James Robinson and Nicola Scott. Robinson has some history with controversy like this, having written one of the first gay male superhero kisses in his fan-favorite run on Starman. "He's going to be the leader of the team, this dynamic hero, he'll do anything to save people, the bravest man on the planet. Why not just make him gay as well?" said Earth 2 writer James Robinson in an interview with USA Today. The writer also confirms, in that same interview, that the removal of Obsidian--Alan Scott's gay son in the old DC Universe--from continuity contributed directly to the choice to reintroduce Alan as a homosexual. "By making [Scott] younger, that son was not going to exist anymore," Robinson told The Washington Post. To Entertainment Weekly, he was even clearer: "The original version of Alan Scott was an older man, and he had a superpowered son, Obsidian, who was gay," the writer explained. "The fact that Scott was young now [thanks to a universe-wide reboot] meant Obsidian no longer existed. I thought it was a shame that DC was losing such a positive gay character. I said, 'Why not make Alan Scott gay?' To Dan DiDio's credit, when I suggested it to him, there wasn't a moment's hesitation." 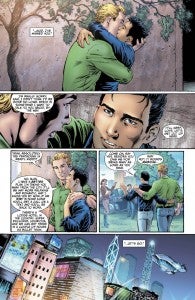 "What I really want to do with this character is make the fact that he's gay to be a part of who he is and not to be the one identifying aspect of him," Robinson told USA Today. "And have his humor and his bravery be as much or more a part of him as his sexuality." To The Washington Post, he said, "He's a media mogul, a hero, a dynamic type-A personality and he's gay," Robinson said. "He's a complex character." To those who worry that Scott's characterization has been changed in the interest of taking advantage of a moment in comics that's been created by the long-rumored marriage of Northstar and Kyle, Robinson says no. "That was never the intention," he told Entertainment Weekly. "When I was first putting together this version of the team eight months ago, and was making the team diverse and interesting, adding in a gay character seemed like the natural thing to do. Quite honestly, it was an offhand comment that Dan made at a panel in England that got everybody suddenly aware and excited. I'm as surprised by it as you are. This was not ever meant to be sensational. It's meant to be about a team that's well-rounded, that shows the diversity of the world around us." Robinson told the New York Post that he's not worried about backlash from groups like One Million Moms, who have attacked DC and Marvel over their upcoming comics with LGBT themes in them. "That kind of negativity is stupid and outmoded," the writer said simply. "We should be preaching love and tolerance." Of Scott himself, Robinson told that same interviewer that "I hope he's a positive figure. If there's some kind of kid out there who's reading the comic and who's worried about the person he is, maybe it will give him a positive sense of who he is. Or maybe a different kid will read it and decide I don't need to bully some kind of kid in school."