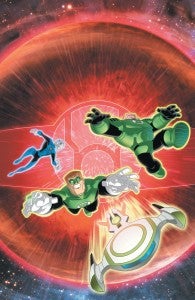 DC Comics's Green Lantern: The Animated Series will not end in March, but instead will go bimonthly, publishing in March and then not again until May, according to a representative for DC.

DC said that because the change was effective immediately, this month's solicitations were "a round off" for Green Lantern, but the series was not ending.

Yesterday, when DC announced that Superman Family Adventures would end in April, we wondered whether it was a move directed specifically at that book or character, perhaps to launch a new series somewhat more closely tied to the upcoming Man of Steel movie. When we (and fans on the DC blog) noticed that Green Lantern was missing, though, it seemed as though there might be something bigger going on with DC's all-ages books.

Green Lantern: The Animated Series is no stranger to abrupt schedule changes; back in October, the DC Nation programming block on Cartoon Network, of which Green Lantern is a part, disappeared suddenly from the cable network's schedule without explanation, returning only weeks ago.

Green Lantern: The Animated Series Comic Is Not Cancelled