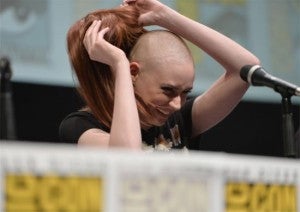 One of the most memorable moments at 2013 San Diego Comic-Con International was when actress Karen Gillan revealed that she had shaved her head for her role as Nebula in Guardians Of The Galaxy.  Karen Gillan first appeared at the Marvel Studios panel with red hair, but when host Chris Hardwick pointed out that Nebula was bald, Gillan said, "Yeah, she is. And I might have done something a little bit crazy."

When Gillan revealed her bald head and hurled her wig into the crowd, the fans at Comic-Con went wild with applause. However, it turns out not everyone was happy about Karen Gillan's shaved head. Earlier today, director James Gunn tweeted, "If you are sending me hate messages about making @KarenGillan2 shave her head, you might consider the overall state of your life."

Even though some fans were evidently upset by the head-shaving, the overall visible feedback on Twitter seems to be highly supportive of Karen Gillan's new look and her commitment to the role.

Loki: Tumblr's Trends Expert Breaks Down Why the Internet Loves the God of Mischief

F9: John Cena Explains Why You Never Saw Him In Fast & Furious Movies