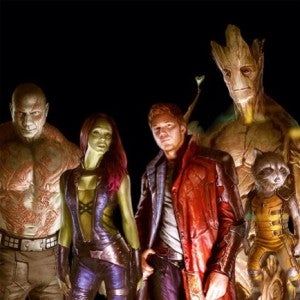 It's hard not to compare Guardians Of The Galaxy to Star Wars, and we mean that in a very good way. The Guardians Of The Galaxy Comic-Con trailer showed off great special effects, quirky alien characters, and a fun-loving human lead. Chris Pratt's character Peter Quill is probably the closest thing on the big screen to Han Solo, since the original Star Wars trilogy. And we also mean that in a very good way.

In a new interview with Empire Magazine, Marvel Studios President Of Production Kevin Feige addresses the inevitable Star Wars comparisons. "We’re not making this to make Marvel’s Star Wars," said Feige. "We’re doing this to explore the other side of the existing Marvel Universe. The fact that Peter Quill (Chris Pratt) is a human from our time, that he carries a personal cassette recorder with him, already it’s very different. It’s not a long, time ago in a galaxy far, far away, it’s now in a galaxy far, far away."