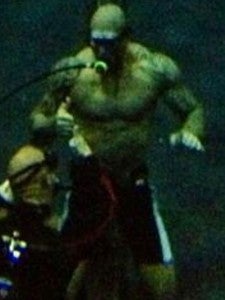 Actor David Bautista has just tweeted out the first production photo from the set of the Guardians Of The Galaxy. At least, we're assuming it's a production photo, but he might just be training for a scene to be filmed later.

The JG refers to Guardians Of The galaxy director James Gunn, who tweeted back, "You’ll play all the roles, like a Marvel Klumps." (Klumps being a reference to The Nutty Professor movies, where Eddie Murphy played the central role of Sherman Klump and several other roles).

Guardians Of The Galaxy Production Photo: Drax The Destroyer Underwater