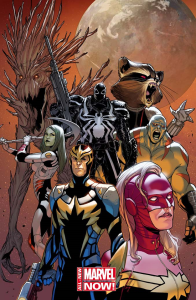 Venom, a villain who is expected to be teased in this summer's The Amazing Spider-Man 2, will join the Guardians of the Galaxy, already confirmed to appear in this summer's Guardians of the Galaxy, beginning in May's Free Comic Book Day issue. Newsarama revealed today that the blacked-out figure who appeared on the cover of the Free Comic Book Day book was in fact Venom, contrary to almost everyone on the Internet predicting Cable. Written by Brian Michael Bendis with art by Nick Bradshaw, the Guardians of the Galaxy story introduces both Venom and Captain Marvel to the team. The issue also contains a backup story by Dan Slott and Giuseppe Camuncoli that sets the stage for 2014's Spider-Man event. Here's Marvel initial description of the story: "The Guardians are about to welcome two new members – including Captain Marvel and one Mystery Marvel Superstar you'd never expect to see with the Guardians of the Galaxy! And this mysterious character is about to set off a chain reaction that takes our heroes to the farthest reaches of space – on a collision course with one of the deadliest threats in the cosmos!"

Guardians of the Galaxy to Recruit Venom