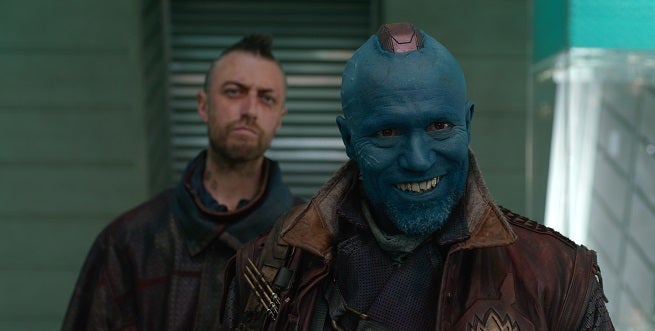 That's according to Michael Rooker, the Henry: Portrait of a Serial Killer and The Walking Dead veteran who plays the character in James Gunn's Guardians of the Galaxy, now available on streaming services worldwide and on Blu-ray and DVD in the U.K.

Rooker, who's been acting since the mid-eighties and has appeared in films like Cliffhanger and Mississippi Burning, probably first came to the notice of comic book and "genre" fans either with Henry or, a few years later, with Kevin Smith's Mallrats. Since then, he's gone on to be a fan-favorite in TV, movies and video games.

Rooker joined us to discuss Guardians of the Galaxy, to compare the Yondu/Star-Lord and Merle/Daryl relationships...and to help us think of something to ask Guardians and Slither director Gunn.

I found some interesting parallels between Merle and Daryl Dixon's relationship and the one between Star-Lord and Yondu. In both cases, you were the kind of de facto father figure, emotionally abusive, but "the only family I have" until your charge was taken in by another group. Do you think that's fair?

You know what? I knew there was a bit of a similarity but it's such a vast difference in the way Yondu responds and Merle Dixon responds -- it's very intriguing.

Gunn wrote the role with me in mind and is kind of into that kind of Merle Dixon stuff too, so it didn't surprise me that there's a little bit of interesting similarities going on. But when I explore more deeply Yondu, it really goes in another direction than the Merle Dixon role. The relationship -- yeah, you know they're brothers, and then there's the surrogate father and the son. it's a very intriguing relationship on both counts, I've got to say.

The similarities sort of end at that juncture, you know? They're tight, they're related in a certain way, but for me it was totally different. I approached it differently. I'm sure as a fan you might see similarities and I'm sure they're there, but I didn't go into it thinking, "I'm going to do it like I did Merle Dixon." For me, it was completely different. 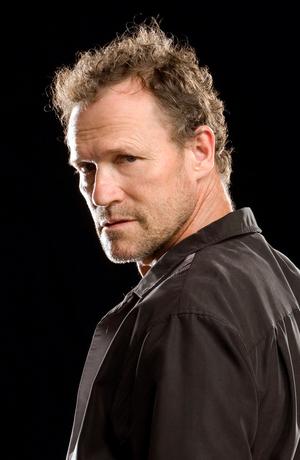 How are you finding the fans? You do a lot of conventions. Do you think the Marvel zombies or the Walking Dead fans are more enthusiastic?

[Laughs] I think the fans are closely related because the fans of The Walking Dead are very much fans of Guardians of the Galaxy as well. So there's a big mix of the fandom -- the individuals who are fans of both projects. And I think that the core connection is that they're all Rooker fans, so they're all my fans from previous movies that are reveling in the fact that I have just hit out of the park these two roles in two different projects that are fan favorites.

They've been very enthusiastic, every time I meet people on the street or at a convention or any kind of Q&A or something like that, it's been quite nice.

You've done a lot of cult-favorite kinds of projects. Right now, Mallrats is on my TV, for instance. Is it weird looking back on some of these smaller films and realizing that they're still plugging away?

You know -- you just don't know what fans are going to get turned on by. 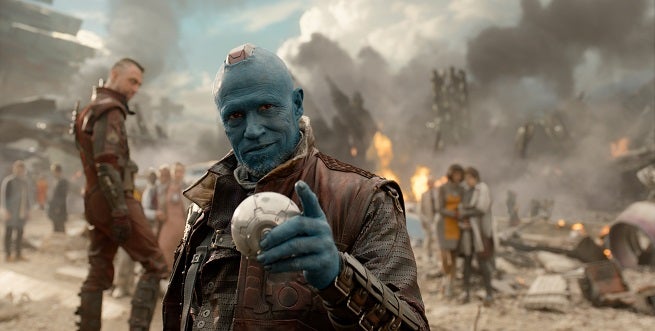 Yondu is a character where that last scene gave validation to what people suspected throughout the film. Did you think as you were reading the script that he was fundamentally a good guy, or did you say, "Oh, fun, I get to play a bastard?"

[Laughs] You know, I never thought of the character as some bad guy or some bastard. I've always thought of Yondu as an individual that is dealing with a late teenage boy with a lot of energy and he's trying his best to make sure this kid is going to grow up to be a very old man.

He's trying to put upon him the importance of having an obligation, but the kid -- Star-Lord -- seems to have his own mind and he likes to do things his own way, and so Yondu is much more interested in trying to rein him in any way he possibly can. By scaring him, by physically giving him discipline the way Yondu would as this alien guy who studied Earth culture. He's adapted the language, he's adapted certain types or corporal punishment and so he uses those on Star-Lord and to little avail, you know? They don't work and he's just baffled at times, I think, but I never thought of Yondu as being some bastard.

I never even thought of Yondu as an abductor [Laughs], but it's pointed of course that [Star-Lord is] stolen away from Earth and it's been bugging him since he was a child. Yondu is a bit baffled by the fact that he doesn't appreciate what he has done for him over the years to save him from being eaten by the crew, right?

You're very close with James Gunn, and I'm interviewing him for the first time tomorrow. What would you ask James Gunn about this film?

I would ask him, "How was it working with the most amazing American actor in recent history, Michael Rooker?" See what he says to that! [Laughs]

Guardians of the Galaxy's Michael Rooker On The Walking Dead, His Fans and Why Yondu Isn't Such A Bad Guy