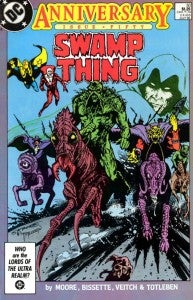 Take this rumor with a huge grain of salt--it sounds an awful lot like a pipe dream.

According to a rumor coming out of Latino Review, Hellboy and Pacific Rim director Guillermo del Toro is in negotiations with Warner Brothers to direct a film that, at least as it's described, sounds quite a bit like a Justice League Dark movie, even if there's no indication that it will be titled as such.

According to the report, "[del Toro] does want to do his own version of the Avengers, just supernaturally. Called Heaven Sent, he is combining all the magical beings from DC Comics in one epic adventure. Deadman, The Spectre, Swamp Thing, Constantine Hellblazer, Phantom Stranger, Zatanna, Zatara, and Sargon as well as Etrigan the Demon will team up to no doubt save us from the Stay Puft Marshmallow man. Now this one is a ways away, but Warner’s lawyers have been working every night trying to clear the rights to all these characters."

Why would they need to clear the rights, when Warner has owned DC free and clear for a number of years? Well, around the same time they were shopping around Arrow and the Booster Gold series that Syfy is developing, Warner Brothers and DC Entertainment optioned the rights to The Spectre to Fox for TV and The CW was looking into making something out of Deadman.

Notably absent from this rumor is Amethyst of Gemworld, who has her own series that just launched and has been featured on animated shorts during Cartoon Network's (currently suspended) DC Nation block. Whether that could mean they're developing the character on a separate track is unclear.

Two of these characters--Swamp Thing and John Constantine--have starred in their own feature films in the past.