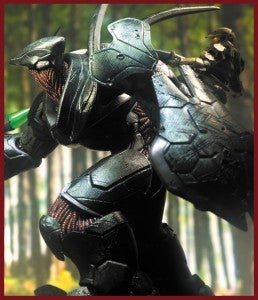 Late last night, McFarlane Toys released a statement announcing the Halo 4: Master Chief vs. The Hunter collector's statue, available through McFarlane's online store. You won't be charged the statue's $225 asking price until yours is ready to ship, which is tentatively set for December. They also officially unveiled the statue, which you can see at right, via a YouTube video,which you can see below. The statue is a limited run of only 500 pieces. You can check out more details from McFarlane below.

Tempe, Ariz.— November 2, 2012 –McFarlane, Microsoft Studios and 343 Industries reveal the first ever HALO 4: FORWARD UNTO DAWN' resin statue THE MASTER CHIEF VS THE HUNTER. HALO 4: FORWARD UNTO DAWN is an exciting story of heroism and sacrifice taking fans back to the beginning of the Human-Covenant War. The live-action digital series created in partnership with top Hollywood talent from film, television and new media, FOWARD UNTO DAWN delivers an exciting story, leading into the events of Halo 4, the biggest entertainment event of 2012. This highly detailed, hand-painted, cold-cast resin statue depicts the series' climactic scene, when the Master Chief - out of ammo and out of options - single-handedly faces the unstoppable rampage of an invading Covenant Hunter to save the lives of UNSC Cadets. This selfless act of heroism inspires the Cadets, especially young Thomas Lasky, to become soldiers capable of defending humanity against its powerful new enemy. Decades later, Commander Lasky and the Master Chief reunite to face a threat even greater than the Covenant in the most anticipated video game of 2012, HALO 4. Commemorating this inspirational moment, our "The Master Chief vs. The Hunter" statue is limited to only 500 pieces, stands at over 14-inches tall on a base spanning 13" wide by 7" deep, and includes a Certiﬁcate of Authenticity signed by McFarlane Toys' creator Todd McFarlane. Each statue and its box is sequentially numbered (individually numbered 1 through 500). The Statue retails at $225 with FREE Shipping (Only available in US and Canada) and is available now at store.spawn.com The Halo: Forward Unto Dawn statue is planned to ship December 2012. Customers will not be charged until the order is ready to ship. Stay tuned to https://www.McFarlane.com  for more info on this statue, along with news on all the awesome McFarlane Toys products.