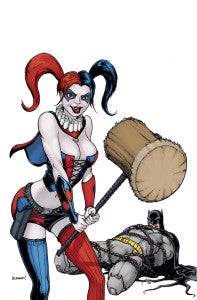 Harley Quinn, Man-Bat, Scarecrow and Poison Ivy will headline their own Villains Month issues as Forever Evil takes over Detective Comics in September. It's interesting that Suicide Squad members Harley Quinn and Deadshot appear on the cover of books that don't generally star them (Detective Comics and Justice League of America, respectively). Will this signal a sea change for those characters, and/or a cancellation of that title after the Forever Evil event wraps up? Stay tuned... Derek Fridolfs, who has been doing a lot of work of late for DC's digital-first titles, will write Poison Ivy's story in Detective Comics #23.1, with Javier Pina providing the art. Matt Kindt will write, and Neil Googe will draw, Harley Quinn in Detective Comics #23.2. Kindt, notably, writes a backup feature in Justice League of America and will take over that title entirely for a time while Geoff Johns focuses on Forever Evil--so it may be that any changes in store for Suicide Squad will tie in with that title (which, as mentioned, will star Deadshot in September). Szymon Kurdanski will provide art on Scarecrow in Detective Comics #23.3, on a story written by Forever Evil: Arkham War architect Peter Tomasi. Detective Comics #23.4 will star Man-Bat with a script from Frank Tieri and art by Scot Eaton and Jaime Mendoza. Jason Fabok provides most of these titles, which works well since his style is so similar to that of David Finch, who will draw the Forever Evil miniseries that Johns is writing. The Harley Quinn cover is provided by Chris Burnham. [gallery ids="51872,51963,51964"]