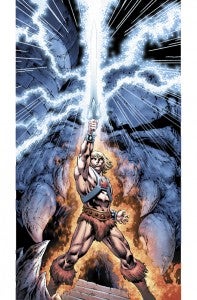 is reporting that He-Man and the Masters of the Universe, the massively successful '80s cartoon which maintains a strong cult following on the Internet, will return to comics as a six-issue miniseries coming in July from DC Comics. Written by James Robinson and featuring art  by Philip Tan and Ruy Jose, the story begins in an alternate timeline, where Skeletor has managed to manipulate time and space to set himself up as the ruler of Eternia. With no memories of their previous lives, He-Man and his fellow heroes (now powerless peasants) must rise up to accept their destinies after Adam begins having dreams that point him in the direction he needs to go. James Robinson, who acknowledges the cheesiness inherent to the property in the MTV interview, says that nevertheless he sees its value. "A certain generation of people, who grew up at the right time, hold genuine affection for Masters of the Universe," said the writer. "The challenge is to write something that raises the standard for the series, with a cool, modern story that nevertheless honors the fans of the animated series and toy line." Robinson says that he doesn't have any idea whether the comic is an end unto itself or a proving ground to see whether He-Man and the Masters of the Universe could work again as a TV series, movie or toy line, but that he expects rights owner Mattel would be keeping a close eye on the success of the series. Robinson, of course, has a history of bringing dignity to properties that other creators may scoff at; his reinventions of Starman and the Justice Society are legendary with DC fans. DC, meanwhile, have had success in the recent past adapting properties like Fringe and Burn Notice as digital comics (with Smallville coming soon), but often have struggled to find success with adaptations from other media in the print market.