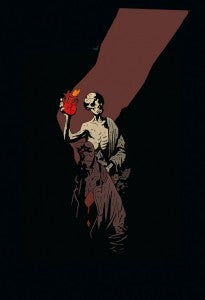 #1 has sold out at the retail and distribution level, and Dark Horse Comics will push a second print into the markets on January 30 to meet demand. The first issue of Hellboy's latest series is his first story since apparently dying and finds him, as the title suggests, in hell and having to fight off all sorts of nasties. It's been lavished with praise by reviewers both inside and outside of comics who have uniformly agreed it's great to see Mignola and Hellboy back in action again. Here's how the publisher describes the new series: "After saving the world in The Storm and The Fury, but sacrificing himself and Great Britain, Hellboy is dead, cast into Hell, where he finds many familiar faces, and a throne that awaits him. After several years away, Mike Mignola returns to write and draw Hellboy's ongoing story. It's a tale only Mignola could tell, as more of Hellboy's secrets are at last revealed, in the most bizarre depiction of Hell you've ever seen." In Hellboy's absence, there have been a number of comics produced based in the same world, but without Hellboy it's just not the same. Speaking with ComicBook.com at New York Comic Con this year, Mignola addressed the way his universe has become such a large and vibrant part of Dark Horse's library. "Well, it was never a goal to expand it just to make a bigger thing. It was simply having too many ideas and too many places where this thing wanted to spill out. And then you couple that with artists who come to you or you meet that you would like to work with and suddenly all these things are possible that I never imagined when I started. I really did think Hellboy would just be my book," Mignola said. "But as soon as Hellboy outgrew the BPRD, the idea of all of these characters I had created having no home…it just didn't make sense. So the trick is to make sure it's an organic, natural expansion and not an explosion where you suffer from quality."

Hellboy in Hell #1 Sells Out