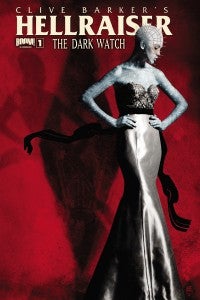 Boom! Studios formally announced today what many fans already knew: Witch Doctor writer Brandon Seifert will take on the co-writing chores on an ongoing, monthly Hellraiser series with horror legend and Hellraiser creator Clive Barker. Hellraiser: The Dark Watch begins in February with art by newcomer Tom Garcia and covers by Tim Bradstreet. The series picks up where Barker's just-ended Hellraiser series left off. "I grew up with Hellraiser and Clive's novels — so it's a huge, surreal honor to be collaborating with him on The Dark Watch! Under Clive's direction, the Hellraiser ongoing series has gone in some radically different directions over the last two years. I'm really excited for what's next — and even more excited that I get to be involved!," said Brandon Seifert.