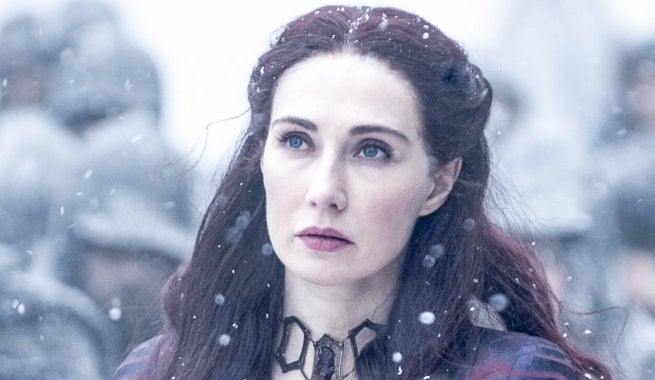 SPOILERS for the Game of Thrones Season 5 finale.

Last night’s Season 5 finale of Game of Thrones, “Mother’s Mercy,” was one of the deadliest episodes of the series yet. However, one death stood out above all the others…but could it be undone?

The death in question is Jon Snow’s. The Lord-Commander was stabbed to death by his brothers in the Night’s Watch. In response to questions about whether or not Jon is really dead, actor Kit Harrington has confirmed that he won’t be returning for Season 6 of Game of Thrones, and showrunner Dan Weiss simply stated, “Dead is dead.”

But is it? In the very same episode we saw the introduction of Ser Robert Strong, who is actually a reanimated Gregor “The Mountain” Clegane. Obviously Qyburn isn’t at The Wall to perform his dark work on Jon, but The Mountain isn’t the first character to be brought back from the dead in Game of Thrones.

In Season 1, Eddard Stark, acting has the Hand of the King, sent Lord Beric Dondarrion to find and execute the Mountain for the crime of murder. The mission didn’t go so well for Beric, and he ended up with the Mountain’s lance shoved through his chest. He wasn’t dead for long though, as the Red Priest, Ser Thoros of Myr – much to his own and Lordd Beric’s surprise – was able to resurrect the “Lightning Lord,” and that wouldn’t’ be the last time. Beric would meet death several more times, and each time Thoros brough him back. In Season 3, Beric’s Brotherhood without Banners received a visit from Lady Melisandre, who seemed surprised that Thoros was able to bring Dondarrion back so many times.

It’s interesting that Melisandre made her way back The Wall after abandoning Stannis (it’s worth noting that, in the books, Stannis leaves Melisandre at the Wall when he marches on Winterfell, so this brings her back in line with her last known location in George R.R. Martin’s original narrative). Her conversation with Thoros indicates that she is aware that R’hllor’s power can be used to resurrect the dead, though it remains unclear if she possesses that power herself. The finale did make a point of showing her entering Castle Black, so it would be a curious plot thread to let dangle.

But then what about Harrington saying he won’t return for Season 6? Season 5 cut Bran’s storyline out entirely, putting it off for another season. With Jon gone, there’s little reason to return to the Wall in Season 6, so perhaps we’ll only return in Season 7, and perhaps then we’ll catch up with a resurrected Jon Snow.

Game of Thrones will return for Season 6 on HBO in spring 2016.