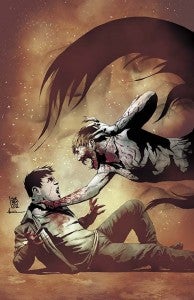 Joshua Hale Fialkov's critically-acclaimed I, Vampire will be cancelled effective April's #19, according to DC Comics's solicitations. The writer, who will start the Spider-Man tie-in series Alpha soon at Marvel Comics, told fans via Twitter that he has known for a while, and that he'll have more DC work coming down the pike soon. "Yep. I, Vampire is done as of 19," Fialkov tweeted. "It's been an amazing ride. Thanks to all of my collaborators and stay tuned for the kickass conclusion. I've known For almost four months and got to write the ending I wanted. No complaints. Follow me to @marvel for Alpha and back to @DCComics in a couple of months in theory." Check out our podcast interview with Fialkov from back around the time of I, Vampire's launch...and stay tuned; we'll try and see if we can't grab him for an exit interview soon.

I, Vampire Cancelled With April's #19