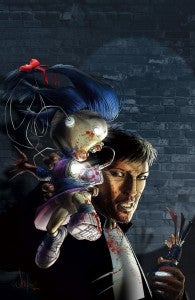 This October, Whilce Portacio will return to Image Comics with his first new ongoing series for the publisher since he left the company. The title, titled Non-Humans, revolves around a spacebound virus that comes to earth and begins animating non-living objects that appear to be life forms, like toys and mannequins.

The Wetworks creator was the first of the seven original Image founders to leave the company, with Rob Liefeld and Jim Lee not far behind. Liefeld has returned periodically and relaunched his entire Extreme Studios universe recently with a variety of talent working with him, and Lee retains a management position at competing DC Entertainment, leaving Portacio as the final founder who could come back, but hadn't.

"The toys are not only a new minority in our world, but because they come from us they are quite human--with all of the frailties, insecurities and desires we humans possess," said series writer Glen Brunswick. "And some of these creatures can be very dark--it's a world filled with toys that envy us, want to be more like us, and are willing to kill us if they can't get what they want. What could be better than that?"

"It's very exciting for me to get back on a creator-owned book," said Portacio. "It took a long time waiting for the right one to come along that would really fire my imagination. I have the same boundless enthusiasm for NON-HUMANS that I had when Image Comics was first formed. I feel like there are no limits to what we can do with this story."