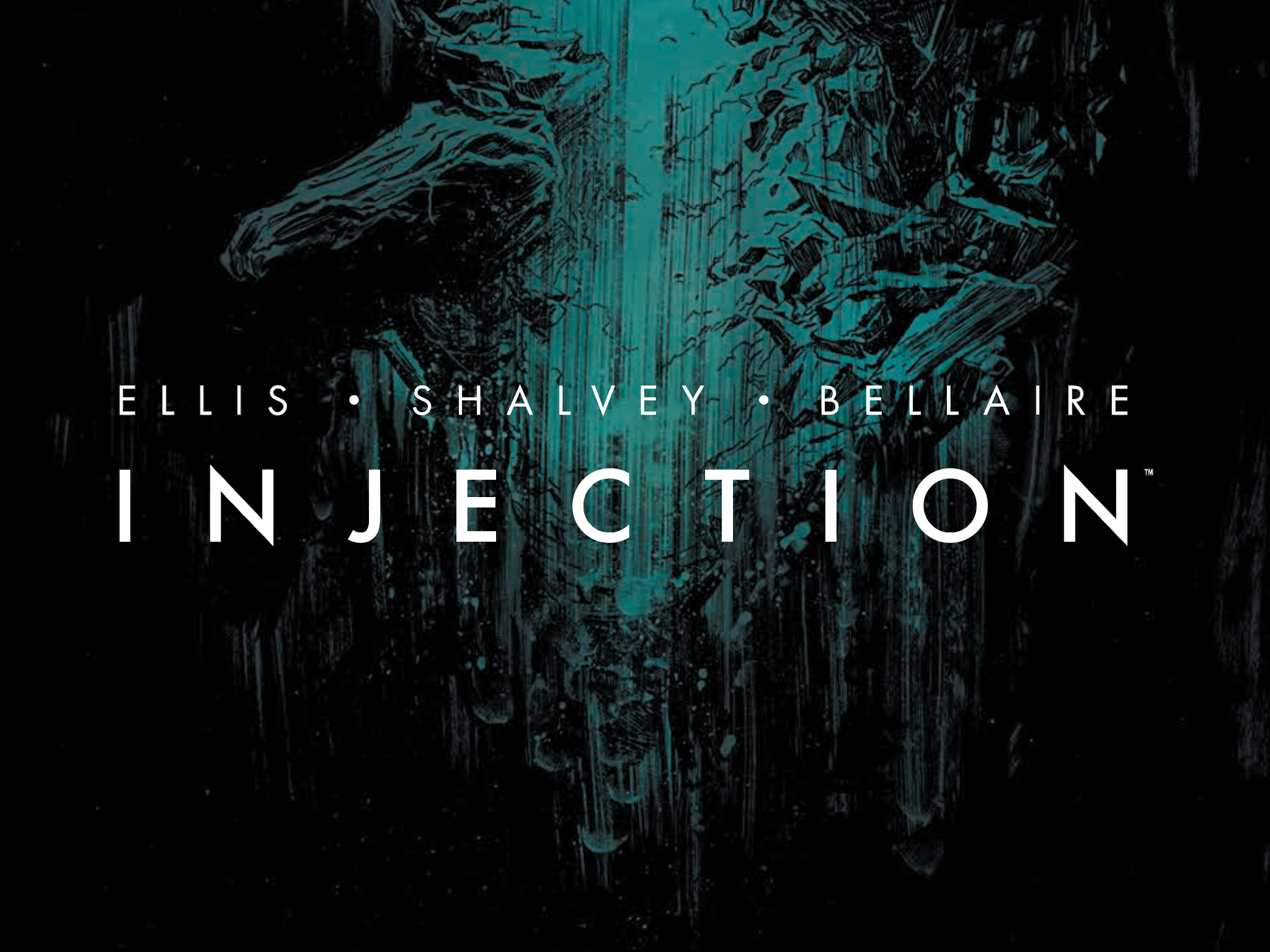 Injection is one Image Comics'--and perhaps the entire industry's--most hotly anticipated series this year. It's no accident that advertisements for the new series feature the tagline "From the creators of Moon Knight: From The Dead". Declan Shalvey, Jordie Bellaire, and Warren Ellis lit the comics world afire with six incredible issues of Moon Knight before departing the series while still at the peak of their shared acclaim. The subsequent announcement of Injection, a brand new series by the same creative team, was met with understandable hype. In Injection #1 it's clear that all of the talent is still there, although it is a vastly different sort of book. The first issue is excellent, but almost nothing like Moon Knight. That may be its greatest strength assuming readers are willing to approach Injection #1 with no pre-defined expectations.

Injection #1 reads like a purposeful departure from the work that defined this trio as a powerhouse. Where Moon Knight was told in single issues, Injection is prepared to be a long-form story; where Moon Knight was precise and blunt, Injection is mysterious and intricate; where Moon Knight was singular in its focus, Injection features a large cast of characters and wide set of concerns. That expansion of pacing, style, and focus makes Injection a considerably more ambitious comic from its very first issue. Shalvey, Bellaire, and Ellis are skilled craftsman capable of making perfect issues of comics. Injection is where they are preparing to challenge themselves and discover their combined limits. As a result, Injection is a comic with some truly outstanding sequences and elements, but also one that is not as immediately striking as Moon Knight.

Injection's first few scenes are undoubtedly the comic's weakest. They are formulated around characters discussing organizations and ideas without any context. They read like a prologue meant to be probed and discussed as the narrative continues in future months, not something to be understood. Ellis writes the dialogue with awareness of the premise and history of Injection, but unlike the opening issue of a similar series like Trees he is unwilling to share any of those ideas with his readership. The resulting conversations are indigestible at best.

What salvages the opening of Injection #1 and encourages readers to push forward to the dramatically better back-half of the issue is Shalvey and Bellaire's contribution. They take a series of talking heads sequences and instill them with skillful characterization and a powerful mood. An indecipherable conversation between two mysterious women in a hospital is rendered compelling purely through the craftsmanship of these artists. It is arguably the best work of both Shalvey and Bellaire's careers to date.

Shalvey's line work and compositions are outstanding. It's considerably easier to garner praise for 20-page action sequences and psychedelic dreamscapes than for academic conversations, but it's in these much less bombastic sequences that Shalvey expresses the depth of his skill. There are some fanciful highlights closer to the end of Injection #1, but it would be shameful to ignore the focus and detail applied to body and facial language throughout the issue. Personalities, motives, and ideas are made clearest in close ups rather than speech bubbles. There is an undeniable life force behind all of the characters, resulting in an assumption of rich, inner lives which have yet to be explored.

Bellaire is functioning at the top of her game as well; no small feat for a recent Eisner award winner. There is a depth and darkness to her colors in Injection #1 that feels like a second phase to her work in comics. While there were elements of the streaking dark shadows to be found in Moon Knight and Zero, here those shadows merge seamlessly into the entire work and fill it with a tone that weaves between ominous and horrifying between scenes. This work might have gone underappreciated if the entire issue had focused on hints and vagaries, but that is not the case.

Ellis' focus on a J.J. Abrams-like mystery box gives way to a more character-focused set of scenes in the second half of Injection #1. Just like in Abrams' Lost, it's not the mystery, but the characters that give life and interest to this story. Ellis provides substantial introductions to three members of the cast: Maria, Robin, and Brigid, all of whom exhibit an extensively English attitude (although Brigid is Irish), meaning they are grumpy, cynical, and caustically funny. This results in a crew who convey a spiritual connection to Ellis' protagonists in Planetary.

Those character-focused sequences at the end of the issue are enough to provide a hook for reader to pick up Injection #2, but it is again Shalvey and Bellaire's artwork that elevates the issue. Robin is approached in the English countryside by a stranger who evokes connections to his family. The mysterious dialogue conjures some clues regarding who Robin may be, but it is his reaction that provides the most information. When the woman mentions a specific location, Bellaire casts Robin's face in a deep shadow like black rain submerging his features. A speckle of ink spots appears in the white background beside his head as well, drawing out the dark thoughts now plaguing his mind. It is mental state made visual metaphor; not drawing too much attention, but impossible to ignore.

What follows that initial response speaks to Shalvey's ability to subtly evoke the fantastic. Robin turns and his clothing is blown by the wind as he stands in a powerful pose. There is nothing explicitly supernatural about the panel, but the combination of his body language and the gusting of wind strongly implies a mystical connection. The movement of Robin's scarf and coat create an active panel that manages to convey not only the presence of wind, but its strength as well. It is a feat that requires careful observation and attention to detail, both of which Shalvey easily evidences. 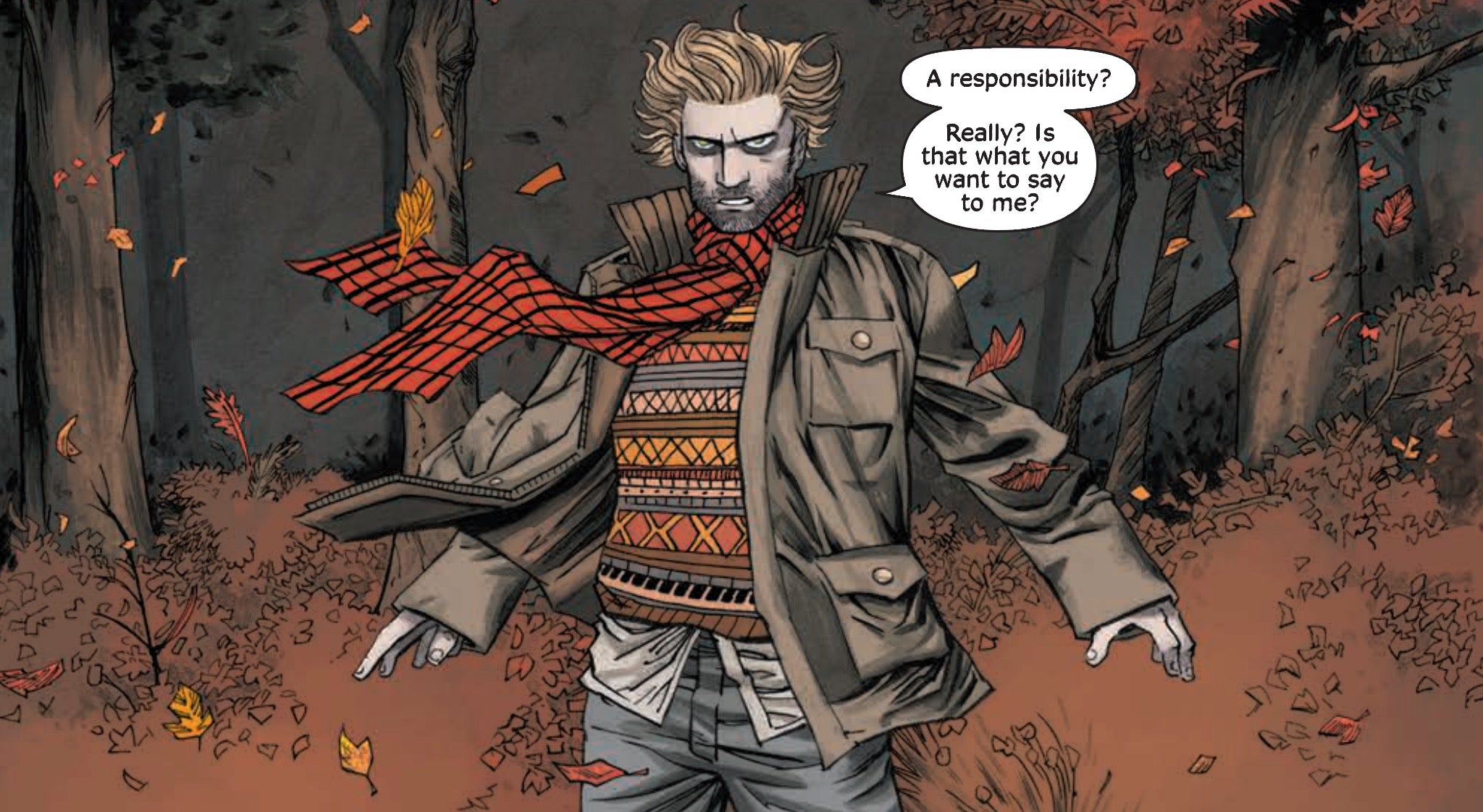 Shalvey's composition of this world is inspiring, but the most exciting element comes in Bellaire's portrayal. She alternates between the glowing, ghostly greens of a swamp and simple, stark whites when light flashes. The unmarred white of the page is a tool that recalls Moon Knight again, but here it is used to evoke an entirely different effect. It exposes the experience of a character, rather than characterizing one individual. Instead of recognizing how alien Marc Spector is, readers are sharing the experience of an alien world with Maria.

Injection #1 is a bizarre first issue with lots of plots points and exposition, but very little understanding. The story itself is not a mystery, but the manner the creators tell it in is mysterious. That experience could be off putting, but at least Ellis appears to be writing with the strengths of his collaborators in mind. Shalvey and Bellaire are more than capable of carrying these mysteries and introverted characters. Together, they elevate the script and transform what easily could have been an odd debut into something puzzling, but pleasing. Add in the beautiful draftsmanship and coloring, and Injection #1 evolves from an intellectual puzzler into must-read comics.

REVIEW: Injection #1 Brings Something Unexpected From a Top Notch Team