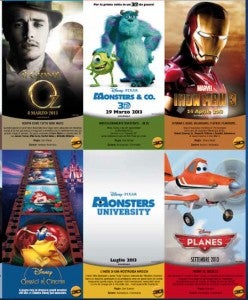 An ad for Walt Disney Studios has been uncovered by Bleeding Cool (who found it in Italian movie magazine Primissima) that appears to show teaser poster art for a number of the studio’s forthcoming tentpole movies, including Iron Man III, The Great and Powerful Oz and Disney-Pixar’s Planes, a spinoff from their popular Cars franchise.

The image also features posters that suggest a 3D reissue for Monsters, Inc. coming in March ahead of the July, 2013 release of Monsters University in the country. The final panel of the six-panel grid of posters shows a “Disney classic of cinema” poster which appears to suggest 3D reissues coming not only for The Little Mermaid but also Snow White, Pinocchio and more.

The Planes poster is particularly interesting next to all of these major theatrical releases because there had been some talk of the Pixar film being marketed as a direct-to-video film. Here, it seems to be suggested for a September 2013 theatrical release. That’s something the Bleeding Cool article says is a rumor they’ve been hearing a lot in the recent past, and notable because the last time Pixar’s John Lasseter interfered to make a direct-to-video film into a theatrical release, it turned out to be Toy Story 2, one of their biggest hits ever.

The Iron Man III image is a headshot/bust of Tony Stark in his Iron Man armor, and it’s too small an image to see at first glance whether there’s any appreciable difference between this and previous versions of the Iron Man armor seen in his own films or in The Avengers--but when you look closely it appears to have small lights on the upper chest that I can’t recall seeing before.