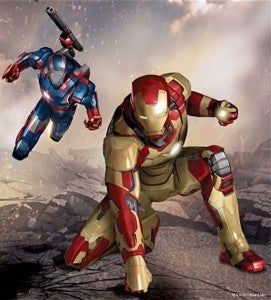 According to the Caged Heat Casting Facebook page, on which Marvel Studios casts extras for Iron Man 3, the film is back in Wilmington, North Carolina this week, looking for scientist-types.

Given the persistent rumors that super-scientist Hank Pym, better known as Ant-Man, might be making a cameo appearance in the film, it seems difficult to ignore the fact that this casting call went out the same day Ant-Man officially got listed on Walt Disney Studios's schedule for 2015.

"CAGED -Seeking 2 males ages 30 -50 (Doctor/Scientist types) 1 Male, 30 -40 years of age, size 44R Jacket, 5 Thin frame males in their 20's. Must be available for fitting tomorrow and filming one day this week. Submit current photo and your information to us at cagedheatextras@gmail.com with THIS WEEK."

There haven't been any casting announcements made for Ant-Man yet, but the rumor that the character would appear in Iron Man 3 has come and gone and come back again at least once. Then again, with Iron Man joining the Guardians of the Galaxy, perhaps we'll see something a bit more...cosmic after the credits in Tony Stark's next outing at the cinema.

Iron Man 3 Is Casting for Scientists--Could There Be an Ant-Man Connection?