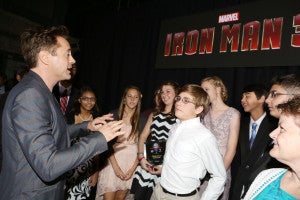 If these kids are the Tony Starks of tomorrow, it's perhaps only fitting that they meet the current model, right?

That's apparently how Disney and Iron Man 3 star Robert Downey, Jr. felt as well, when he crashed the El Capitan Theatre during the awards ceremony for the 12 finalists in the Iron Man 3: Inventor and Innovator Fair tonight.

Disney announced the 12 finalists in the Marvel’s Iron Man 3: Inventor and Innovator Fair, a nationwide science competition held in conjunction with the release of Iron Man 3, sponsored by Discovery Science Center, Broadcom Foundation and Marvel Studios, along with Visa Signature and the famous El Capitan Theatre in Hollywood.

On the evening of May 3rd, at the 4:30 p.m. PST screening of Marvel’s Iron Man 3, Grand Prize winners received their awards in a special ceremony onstage at the El Capitan Theatre, hosted by Asa Kalama,  a Walt Disney Imagineer. All 12 Iron Man 3: Inventor and Innovator Fair finalists will have their projects on display at the El Capitan from May 3rd – June 19th.

You can check out some images from the event below.

You can check out more information about the finalists at our earlier story.