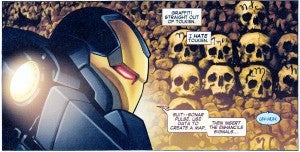 In what's likely to be one of the more loaded single lines of dialogue uttered in a Marvel NOW! book, Tony Stark narrated to himself in today's issue of Iron Man, "I hate Tolkien."

Coming as it does just ahead of the release of The Hobbit: An Unexpected Journey, which hits theaters this week, Iron Man's barb at one of the patron saints of geek culture is likely an intentional slight, by writer Kieron Gillen to get noticed at a time when so many other Marvel titles are releasing #1 issues and poor Iron Man is all the way to #4 already.

And we're writing about it. Well played, Gillen.

This scan thanks to Bleeding Cool, who rightly point out it may also be an old school case of sci-fi fans versus fantasy fans, what with Iron Man prepping to join the Guardians of the Galaxy when that title launches soon.