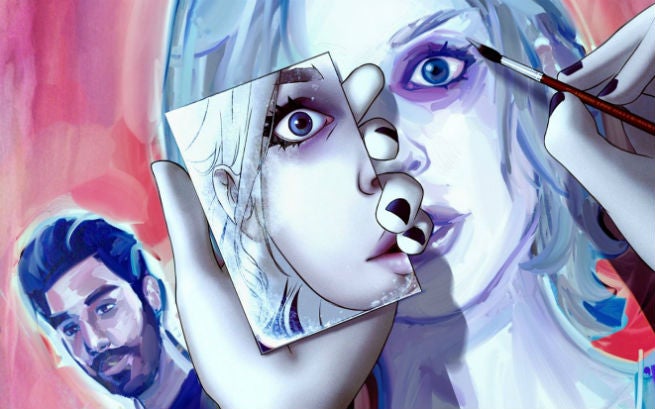 The episode opens when a man and a woman enter an apartment only to find the man there -- Javier -- stabbed through the eye and dead.

Later, Ravi raves about the dead man's artwork, while Liv says she has no taste for it (umm...no pun intended). Clive is trying to get information from the couple who had walked in earlier, but the woman is hysterical and the man is trying to get Clive to back off and let her recover.

Clive is convinced that the murderer is the victim's wife (the sobbing woman); they can't give him anything to justify that. They take the murder weapon -- a paintbrush handle -- out of the eye, and it's got brain matter on it.

Later at Liv's, Major comes over with a box of her stuff and a bunch of awkward jokes to try and lighten the mood. After he leaves, Liv and Peyton argue briefly about Liv having broken up with him.

That night, Liv can't sleep, and keeps dreaming about Blaine. At work, she's been looking for him on the Internet. She's stressing out and when Ravi tells her to chill out and read a Cosmo, she sees a sexy article and has a flashback to Javier having an affair when someone interrupted the sex.

Liv heads to the police station and tells Clive what she remembered about the vision -- including a number of sexy details. She can't tell him who anyone else in the vision was, though, and Clive gets frustrated, then takes Liv to see Lola, Javier's wife. Her friend Tasha was the one in the vision. Lola calls her "my favorite of all of Javier's lovers."

Later, she's telling Clive about Javier's art, which dominated their life. Meanwhile, Liv can't keep her eyes off of Tasha...and at one point they hold hands. Lola explains that the pair had an open relationship, and Clive has a hard time believing that monogamy wasn't important to them.

Outside, Clive is still convinced it's Lola until he gets a text that says forensics indicate the murderer was probably much taller than Lola.

Liv heads to the morgue, where the police sketch artist is there; he thinks Liv is looking for a potential boyfriend, not a zombie. She has a hard time describing Blaine, because she's using pretentious arty talk. Eventually she takes the pad from him and wants to draw herself, so he tosses it down and leaves. Ravi excitedly deduces that Liv has acquired a new skill and hands her a pencil.

Later, Clive is interviewing Javier and Lola's friend and art dealer, who had been the one to bring Lola home the night of the murder. The dealer tells Clive to leave Javier's friends alone and look at the boyfriends of all the women Javier used to sleep with.

Back at the morgue, Liv finishes drawing up the sketch of Blaine, which Ravi is going to send to the boat massacre survivors to see if anyone remembers him.

At home, Liv objects to a painting she and Peyton bought years ago; she has become fascinated by art and beauty and sets up easels to paint.

Back at work, she puts on her jacket and is met by Blaine, who says he's heard she was looking for him. He found a poster based on her sketch; he knows she's a zombie. She admits that until the vision, she thought that she was the only one. He tells her that he gets his brains by graverobbing. They compare notes about going into "full-on zombie mode," and the texture and taste of brain (both hate it).

Ravi comes in and is excited to see Blaine, asking him for a urine sample. Blaine tells them that he has no idea how this happened to him, but that he was high the night of the zombie attack. Liv tells him that he's the one who turned her, and he says he doesn't remember it at all and apologizes for it. As he's doing so, he knocks over some tools and Liv has a vision of somebody upset with Javier, smashing some of his art supplies after catching him in bed with Tasha. At the police station, Clive has already brought him in for questioning when Liv comes to tell him what she saw...and of course she derails the interrogation with her attraction to him. The boyfriend tells them that Javier had dumped Tasha for his manager's 18-year-old daughter.

At the bar, Blaine meets up with a lonely but attractive middle-aged woman and asks to buy her a drink. The pair flirt and then head to her apartment to have sex. While she starts kissing him, his eyes start to turn more zombie-ish.

The next day, Major comes to see Liv while she's painting. He's shocked to see her painting and even more surprised when she keeps flirting with him. She's also listening to an old mix CD of jazz that he gave her and that she hated at the time. He offers to make her more recordings and she kisses him on the cheek; he leaves, stunned.

Back at the morgue, Blaine tries to convince Liv that he's trying to be a better person; he convinces her that he's no longer dealing drugs and asks if she'll occasionally share brains. She says she'll bring him some later, and that he's going to go to an Internet cafe.

He goes to wait for her but a pair of enforcers for the drug dealers he used to work for come out to look for him. Liv comes, sees them arguing and assumes that he's still dealing, so she leaves. After she does, the pair finally force him into the car, but he just tells them that their boss is an idiot and that when he's in charge he won't make the same mistakes -- then he kills them in spectacular fashion.

Later, he heads to the apartment of the woman he slept with; she's pale and her hair is turning white. She asks him what's happening. He tells her she's a zombie now, and that for $25,000 per month, he'll bring her the brains she needs to remain fully functional. He brings her some of the brain from the dealers.

Clive comes and asks Liv to come help. He has evidence that Javier's art dealer left dinner to attempt an ATM withdrawal near Javier's apartment the night of the murder but was broke. Ravi invites himself along to a memorial exhibition of Javier's art. Liv wanders the apartment looking for things to find. There, Tasha asks Ravi to help her get rid of her ex-boyfriend. Liv is checking out Javier's workspace when the man comes up to her and tries to trap her. She clocks him and runs away, joining Clive to try and pin the murder on the art dealer, Liv having just realized that Javier got the man's daughter pregnant.

But the art dealer is clueless, and a step in the living room means that a shorter person could have killed Javier and made the angle look like it was coming from above. Clive figures out that Lola always wanted children and that while the fooling around didn't bother her, the fact that Javier was going to have a child with a friend's daughter did. The dealer, who had been in love with Lola, is furious that she was using him to protect herself.

That night, Liv eats a bit more of Javier's brain so that she can continue to embrace the beauty in the world. She paints frantically and then goes to Major's to ask for more music. She wants to sit with him and hang out; he thinks she's drunk or at least being weird but she makes him sit with her. She tells him that she can't take another second of not being close to him, and kisses him; he gets up and yells at her for her abrupt mood changes, kicking her out. Neither of them is happy about it.

That night, she and Peyton hang a painting that she made -- one that Peyton doesn't seem particularly pleased with, but Liv loves it.

iZombie Recap With Spoilers: Brother, Can You Spare a Brain?