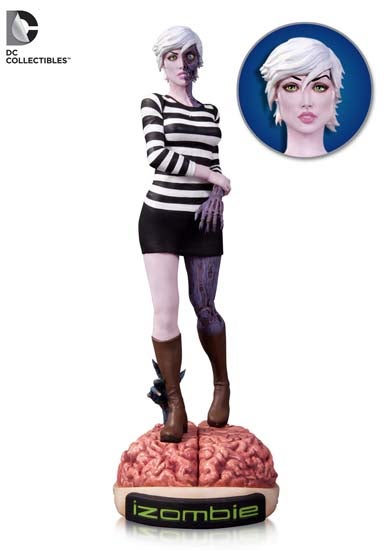 With a TV series looming on The CW in 2015, DC Entertainment are reaching into their Vertigo back-catalog to create merchandising for Chris Roberson and Mike Allred's critically-acclaimed series iZombie. A statue feature Gwen Dylan, the series' star (who doesn't appear in the TV show), will be released in November, TV Guide revealed. Based on Allred's designs and sculpted by Phil Ramirez, the statue is approximately 9.25 inches tall and will go on sale this November for $99.95. The comics featured Dylan, a young gravedigger who gained the memories of cadavers whose brains she ate in order to keep her monstrous side at bay and prevent herself becoming fully a zombie. He was joined by a fantastic and fanciful group of supporting characters like ghosts and were-terriers. The TV iteration features Olivia "Liv" Moore, a med student who takes a job at the coroner's office in order to gain similar access to bodies and experiences the same psychic impressions from those whose brains she eats. It was developed for television by Rob Thomas and Diane Ruggiero of Veronica Mars fame.