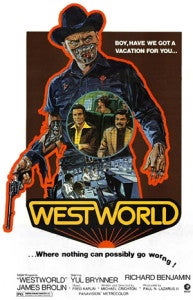 Genre TV has been pretty good to HBO in recent years, with True Blood and Game of Thrones garnering fantastic ratings, pushing merchandise and generating buzz and award nominations for the cable network. Now they're apparently looking to add to that lineup with Westworld, an adaptation of Jurassic Park creator Michael Chricton's 1973 science fiction film of the same name. Being developed by The Dark Knight co-writer Jonathan Nolan and Star Wars Episode VII director J.J. Abrams, the series joins Fringe, Revolution and Person of Interest as Comic Con-friendly series developed by Abrams's Bad Robot shingle. This isn't the first time Westworld has been tapped as a potentially-lucrative franchise.  The film had an official sequel titled Futureworld, followed by a 1980 TV series Beyond Westworld, which was a continuation of those film's continuity (only three of the five filmed episodes aired before cancellation). Warner Bros., who own the rights, have been looking for a way to exploit the content recently, with a film reboot as their first choice. Arnold Schwarzenegger was rumored to be involved as early as 2007, but as one might imagine, it's difficult to get him to play an out-of-control android killing machine without the Terminator branding attached. The story revolves around a hyper-realistic Old West theme park populated by androids with whom tourists can interact and even draw pistols at dawn if the money is right. When the androids begin to break down and exhibit signs of free will, everything descends into a battle between the park's attractions and the humans unlucky enough to be trapped there with them.