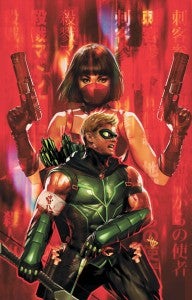 When DC posted solicitations to their December solicitations for their Justice League family of titles, Green Arrow #4 was listed as being written by Keith Giffen and Dan Jurgens. This left many readers scratching their heads as to the status of series writer J.T. Krul's whereabouts--and whether the new team might be a permanent change. It wasn't long before sites all over the Internet were reporting that it was, in fact, the case, after Keith Giffen reportedly confirmed it to Newsarama. ""Yes, Keith Giffen and I are stepping in to handle the writing chores on Green Arrow as JT Krul moves over to a new, exciting project," Dan Jurgens told ComicBook.com. "It was great working with JT to get this re-imagined Green Arrow up and running, just as it's going to be great working with Keith to keep pushing ahead." In a note posted to his Facebook account, Krul told his fans today that #3 would indeed be his last issue on the title. "I was excited to bring a new yet familiar take on Green Arrow in the new 52," explained Krul. "But, I've been writing him for a few years now and an opportunity came up that I really wanted to tackle. I had to make a choice." While Krul said that he loves the character of Oliver Queen, and considered writing him for the last couple of years a "dream come true," he says that when he had to choose between leaving Green Arrow or Captain Atom to take on his new mystery project, he simply couldn't leave Captain Atom. "I don't think I've been more excited about a project," he said of Captain Atom. "Working with Freddie Williams is amazing and I really think it's among my best work at DC to date. It was a tough call - like picking a favorite child." His next, undisclosed project will also be for DC Comics, according to his Facebook post. Krul said, "It perfectly exemplifies what DC is all about with the New 52 - taking the best characters in comics and presenting them in new and exciting ways." This has been a fast-moving week for creative changes; besides the Captain America change reported earlier today, John Rozum departed as co-writer of Static Shock on Thursday. DC's Young Justice solicitations haven't yet been released, so it's impossible to know yet whether the December teases will provide insight as to whether Scott McDaniel will be writing that title on his own or whether someone else will step into the role Rozum vacated.

J.T. Krul Off, Keith Giffen & Dan Jurgens on as Writers of Green Arrow