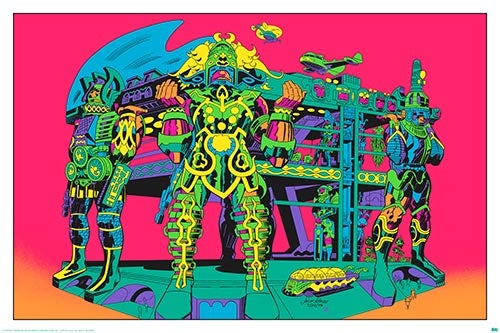 Heavy Metal, who will print Jack Kirby's legendary Lord of Light artwork for the first time in color later this year, will provide fans with an opportunity to take that art home -- and admire it under their black lights.

These works of art by Geller & Kirby, mostly unseen before now, are part of American history as they were the artwork used by the CIA for OPERATION: ARGO, which helped free American embassy workers during the Iranian coup in 1979. They had been created as concept art for a planned film adaptation of Roger Zelazny's Lord of Light and when the movie never got off the ground, the imagery was used to sell the idea of a theme park based on a (non-existent) movie called Argo.

“To me these drawings represent timelessness, that has bridged from comics and fantasy -- they were designed and drawn to becoming actual major structures in a theme park, blended with Jack and I’s visions of Roger Zelazny's novel Lord of Light. They are Jack Kirby's most powerful and celebrated foray into Fantasy-as-Real Architecture possible” said Barry Geller, son of filmmaker Ira Geller, who was to direct Lord of Light.

“We couldn’t ask for a better body of a work for the long overdue debut of Jack Kirby in Heavy Metal,” said Heavy Metal co-CEO Jeff Krelitz. “As a tip of the cap to one of my favorite artists and the era of the early 1970’s, I wanted to kick off our year long prints program at Comic-Con with blacklight renditions as psychedelic as the story itself.”

“It was a surreal honor to work Heavy Metal and Barry Ira Geller on this rarely seen, spectacular Jack Kirby art” said colorist Mark Englert. “I grew up reading tattered copies of Kamandi and that remains one of my very favorite comic books to this day. I’m beyond excited to add my name to the list of Kirby collaborators!”

The prints were produced in a strictly limited edition of just 50, with a small number available for preorder on the Heavy Metal website now. All orders must be picked up in person at Comic-Con during all hours of the show at the Heavy Metal booth (#1529).