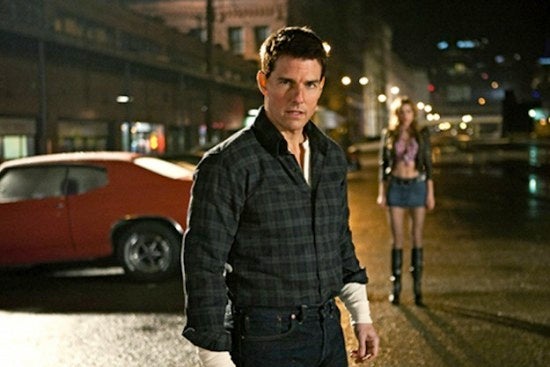 Tom Cruise will return as Jack Reacher in Never Go Back, Deadline reports.

In the novel, which was published in the fall, Reacher heads back to his old military base in Virginia to take a woman to dinner who is now the commanding officer. By the time he gets there, she has been arrested, and Reacher finds himself being charged with pummeling one guy and fathering a child with a woman. He can’t remember either transgression but gets to the bottom of it with cunning and sometimes brute force.

Cruise and the studio hope Chris McQuarrie, the longtime screenwriter who made his directorial debut with Jack Reacher, will return for the sequel but it's not a done deal; McQuarrie is working on the script for Mission: Impossible 5 with Iron Man 3's Drew Pearce. McQuarrie is set to direct that film and the studio is out to writers to see about getting Never Go Back written without McQuarrie.

Cruise’s new film, Edge Of Tomorrow, will get its first trailer this week and play this Friday on prints of The Hobbit: The Desolation Of Smaug. The film is an adaptation of the popular Japanese science-fiction light novel All You Need is Kill by Hiroshi Sakurazaka

Jack Reacher Sequel In the Works Based on 2013 Novel