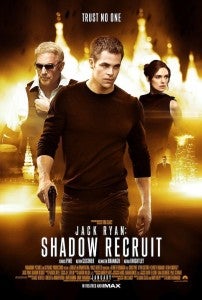 The American Association of Retired People today announced the launch of the "AARP Movies for Grownups Seal," which recognizes films that have a special appeal to 50+ audience members. The first film to receive the Movies for Grownups Seal is Paramount Pictures and Skydance Productions’ Jack Ryan: Shadow Recruit, starring Chris Pine and directed by and co-starring Thor and Hamlet director Kenneth Branagh.

“We are delighted to announce the debut of the Movies for Grownups Movie Seal and are thrilled to award this distinction to Jack Ryan: Shadow Recruit,” said Myrna Blyth, SVP and Editorial Director of AARP Media. “Returning the beloved Tom Clancy character of Jack Ryan to the big screen, the film features performances by 50+ talents including director and co-star Sir Kenneth Branagh and co-star Kevin Costner. We believe the film will hold strong appeal for the 50+ demographic, which is responsible for one in four of all opening weekend ticket sales.”

“We are thrilled to be the very first picture to receive this seal of approval on behalf of such an important and discerning audience of adult filmgoers represented by AARP,” said LeeAnne Stables, EVP of Worldwide Marketing Partnerships, Paramount Pictures.  “The combination of this suspenseful thriller and the talents of Chris Pine, Kevin Costner and director Kenneth Branagh is something moviegoers of all ages will appreciate.”

The film opens in the U.S. today and is projected to take the #3 spot at the box office with about $20 million, coming in behind Kevin Hart's comedy Drive Along and the Mark Wahlberg action flick Lone Survivor. This is the fifth big-screen outing for Jack Ryan, a character previously portrayed by Alec Baldwin, Harrison Ford and Ben Affleck. The last Jack Ryan film, The Sum of All Fears, hit theaters in 2002, opening with $31.2 million.

Jack Ryan: Shadow Recruit Gets Recognized By the AARP as a "Movie For Grownups"