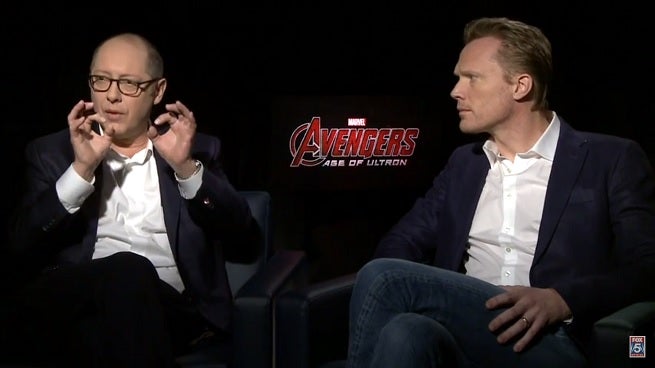 During a junket interview this weekend for Avengers: Age of Ultron, actors James Spader and Paul Bettany told Fox 5 DC how director Joss Whedon captured their respective characters in the upcoming blockbuster.

"You know, the technology has changed quite a bit in that prior to I think maybe our film -- I'm not entirely sure -- if you were a computer-generated animated character like he is, then you would be on the set, sort of off-camera and you'd be there for the other actors to play across from and so on, and obviously you would voice it," explained Spader, "but your physicality would be captured in the motion-capture stage after principal photography -- or concurrently when they didn't need you on set. In this case, I was wearing a fractal suit and big sort of backpack with all sorts of things. Also, depending on what stage of Ultron it was, I also had these sort of braces for putting his body in different positions and weights and balances and so on -- and then a big head rig that had headlights that were circular lights with cameras that were recording my face all the time. Then I was standing on the ground but there was also a rod that came out of my backpack and went up to eight feet tall or however tall he is, and up there were also two little red eyes so that the actors playing across played to that as his height. Except in certain cases where the blocking was such where we would be able to play on the same plane."

He said that an exception was that he got to perform "head to head" with The Vision, since the characters were meant to be the same height. Paul Bettany, though, was in mostly practical makeup.

"There's some CG going on with my eyes," Bettany said, "but I'm wearing that stuff."

You can see the full interview -- which actually includes a number of other interviews, and the Ultron/Vision stuff around the 6:45 mark -- below.