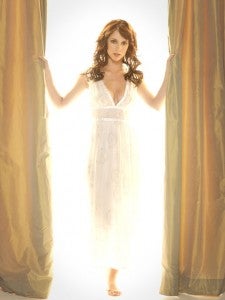 In an interesting interview with MTV, Ghost Whisperer and Party of Five actress Jennifer Love Hewitt stated her very earnest desire to play titular DC Comics heroine Wonder Woman. During the interview, JLH indicated that she's very interested in playing the heroine, mainly because she herself is ready to try roles that are more action oriented. "I want to play Wonder Woman, I want them to make the movie of Wonder Woman and I want to play Wonder Woman so bad, I think it'd be really fun," Hewitt said, adding that her natural athleticism and love of Wonder Woman's gold bracelets (ahem, silver) among other things made her a good choice for the role. In her defense, Hewitt has been inching more and more into the comic book realm over the past few months. With her Ghost Whisperer comic book, from IDW Publishing, and her new partnership with IDW on her comic book The Music Box, Hewitt is indicating that this may not be a passing interest! Thoughts? Opinions? Does she have what it takes to wield the magic lasso?