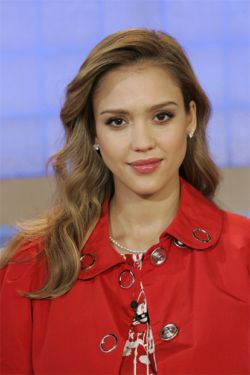 Jessica Alba is well-known to comic book fans. She first made a name for herself on television as the lead character in James Cameron's Dark Angel. In Dark Angel, Alba played Max, who was a genetically enhanced human prototype. She escaped from her government captors and lived her life on the run in the underground of 21st century Seattle. After the success of Dark Angel, Jessica Alba was able to land several roles in major motion picture. Alba starred as Sue Storm, also known as Invisible Girl, in the first Fantastic Four movie and in the sequel Fantastic Four: Rise of the Silver Surfer. Jessica Alba also starred opposite Bruce Willis in the movie adaption of the comic book Sin City. Sin City was directed by Robert Rodriguez and comic book writer Frank Miller. Now, Jessica Alba will be making the leap from the big screen back to the small screen when she guest stars in a post Super Bowl episode of The Office on NBC. In the special episode, some of the office workers will try to secretly watch a bootlegged Hollywood movie during the workday. Both Jessia Alba and Jack Black will be featured as characters in the bootleg movie. The "Stress Relief" episode of The Office will air immediately following Super Bowl XLIII on Sunday, February 1, 2009 on NBC. After the post Super Bowl episode, the fifth season of The Office will continue to air in its regular time slow of Thursday from 9:00 PM to 9:30 PM ET/PT on NBC.