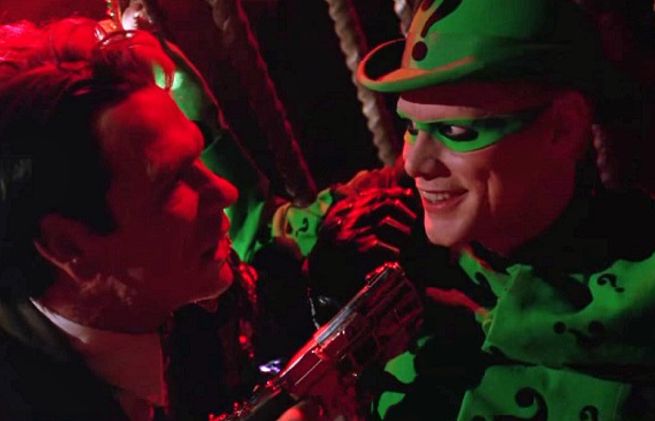 Tommy Lee Jones is not a Jim Carrey fan. In fact, according to Carrey, Jones hates him.

While promoting his new film Dumb and Dumber To on the Howard Stern Show, Carrey admits there was heavy animosity from Jones while the two of them filmed the 1995 superhero flick Batman Forever .

"Sometimes that Rhodes Scholarship is more of a weapon than an asset." Carrey said in reference to Jones's Ivy League education. "I think he was just a little freaked out because Dumb and Dumber came out on the same weekend as Cobb, and Cobb was his big swing for the fences and that didn't work out and that freaked him out a bit I think," Carrey said in reference to Jones' 1994 Ty Cobb biopic which underperformed at the box office.

"I walked into a restaurant the night before our big scene in the Riddler's lair and the maitre'd said, 'You're working with Tommy Lee Jones, aren't you?' And I said 'Yeah, I am.' He said, 'He's in the back corner, he's having dinner.' I said, 'Oh, great, I'll go say hi.'" Carrey recounted. "I went up to say hi and the blood drained from his face, in such a way that I realized that I had become the face of his pain or something. "He got up, kind of shaking, and hugged me and said 'I hate you. I really don't like you,'" Carrey added. "I was like 'Wow, okay. Well, what's going on man?' And he said, 'I cannot sanction your buffoonery.' He did not want to work with me at that point."