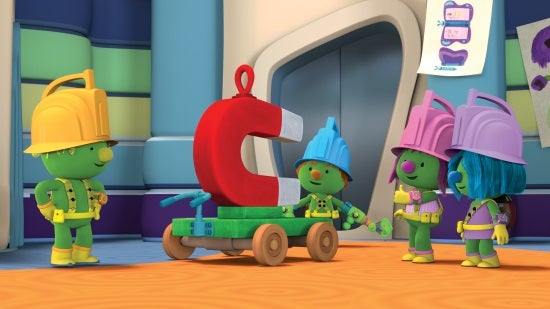 Hulu has announced its first original children's series, Doozers. The series comes from The Jim Henson Company (Dinosaur Train, Sid the Science Kid) and DHX Media (Yo Gabba Gabba, Johnny Test!) and will run for 52-episodes. Doozers will encounrage kids to design and create, and is based on the characters from Jim Henson's Fraggle Rock. The show will star the "Pod Squad," Spike, Molly Bolt, Flex and Daisy Wheel. The Doozers live in a modern, imaginative and eco-friendly place called Doozer Creek. The doozers are full of energy and initiative, constantly coming up with ideas and putting them into action, whether building a giant gingerbread house or a derby racer. The show will be a celebration of the "I can do it" attitude and will feature a design thinking curriculum that is part of an overall STEAM (science, technology, engineering, art, math) initiative. "The series encourages kids to embrace their own creativity.  Inspired by a whole new group of whimsical characters our viewers will want to design, tinker and experiment with their own ideas while learning to have confidence and resilience to reach their goals," said The Jim Henson Company's CEO Lisa Henson. "Our pod squad is right at home with Hulu Kids, because Hulu is a company of builders and innovators like the Doozers, and because kids can learn from and spend time with these characters on-demand like never before." Doozers will debut on Hulu on April 25, 2014 as part of their ad-free kid's hub.